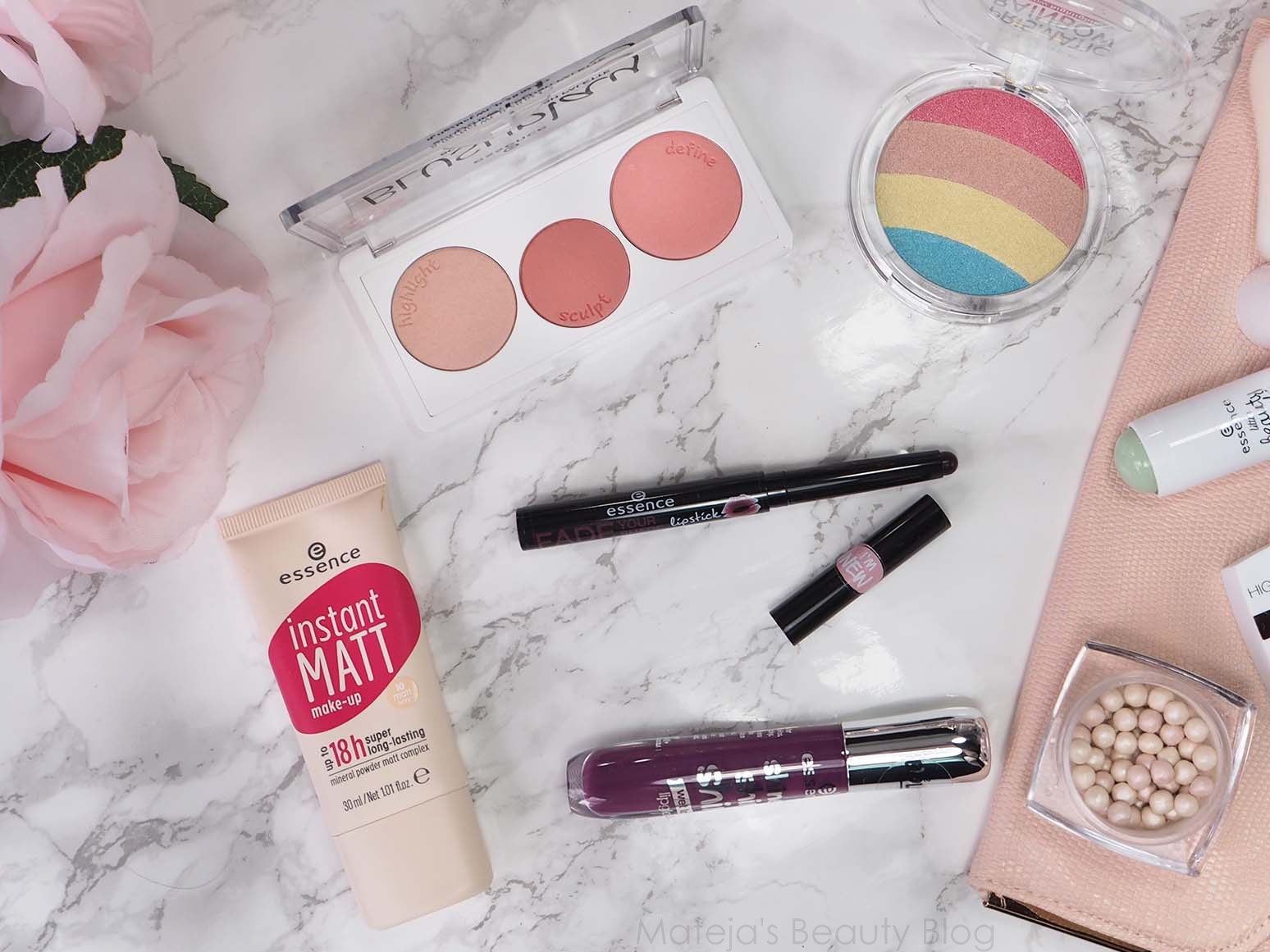 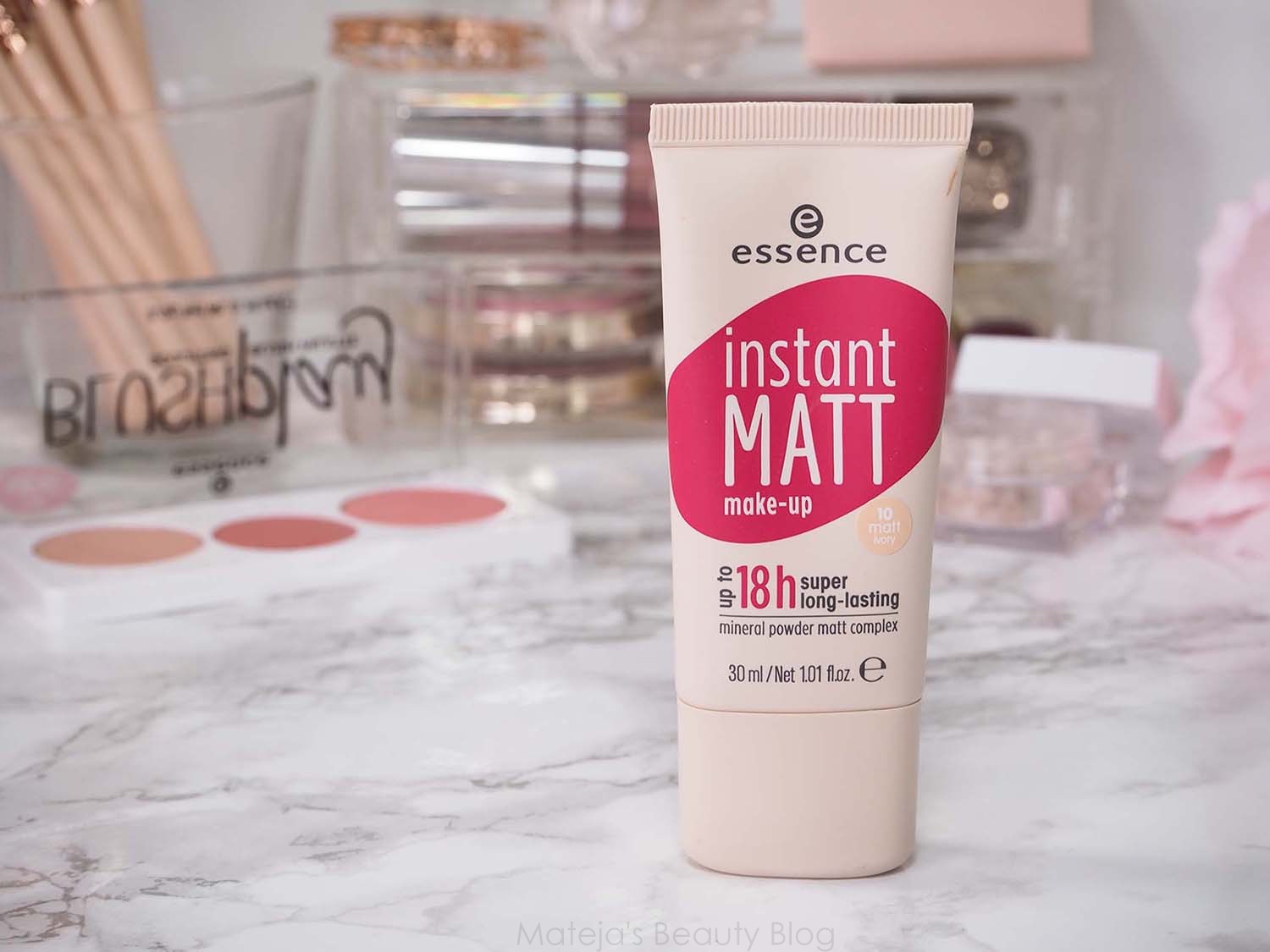 Instant Matt foundation
10 Matt Ivory
Essence’s other matte foundation, All About Matte, got replaced with this one called Instant Matte. It claims to be long-lasting (a bold up to 18h claim), waterproof and that it has full coverage.
Texture: It’s a very thick, almost paste-like foundation, but with a dry matte texture. Those mousse foundations come to mind when I use this and I had difficulties blending around the edges because it’s thick and it sets fast, so you have little time to work with it. It looks awful on close inspection on my currently combination-dry skin. It’s flaky and uneven, the only word I can come up with is tragic. I have no idea how it would look on very oily skin, but I can only assume that it fits such skin better. 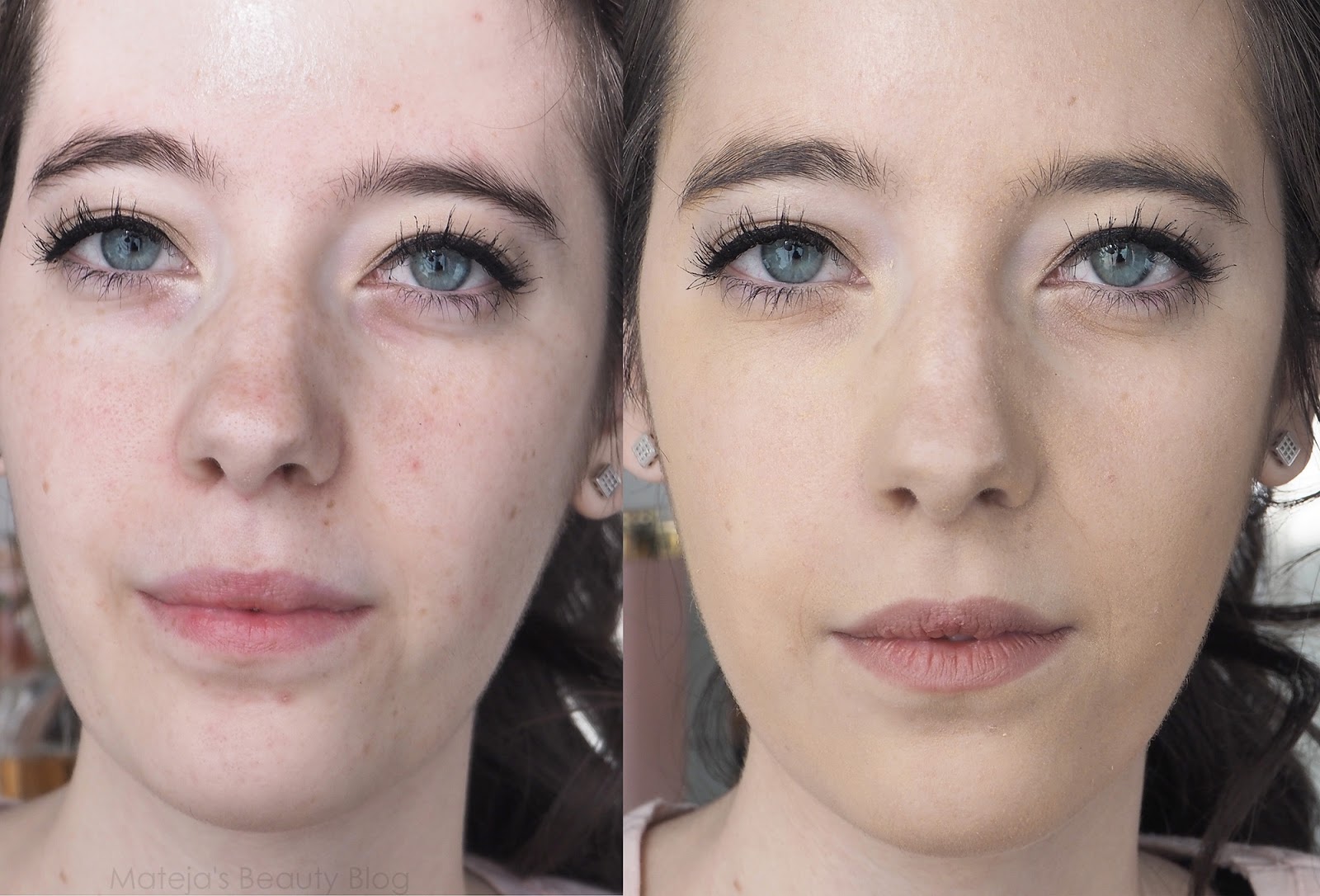 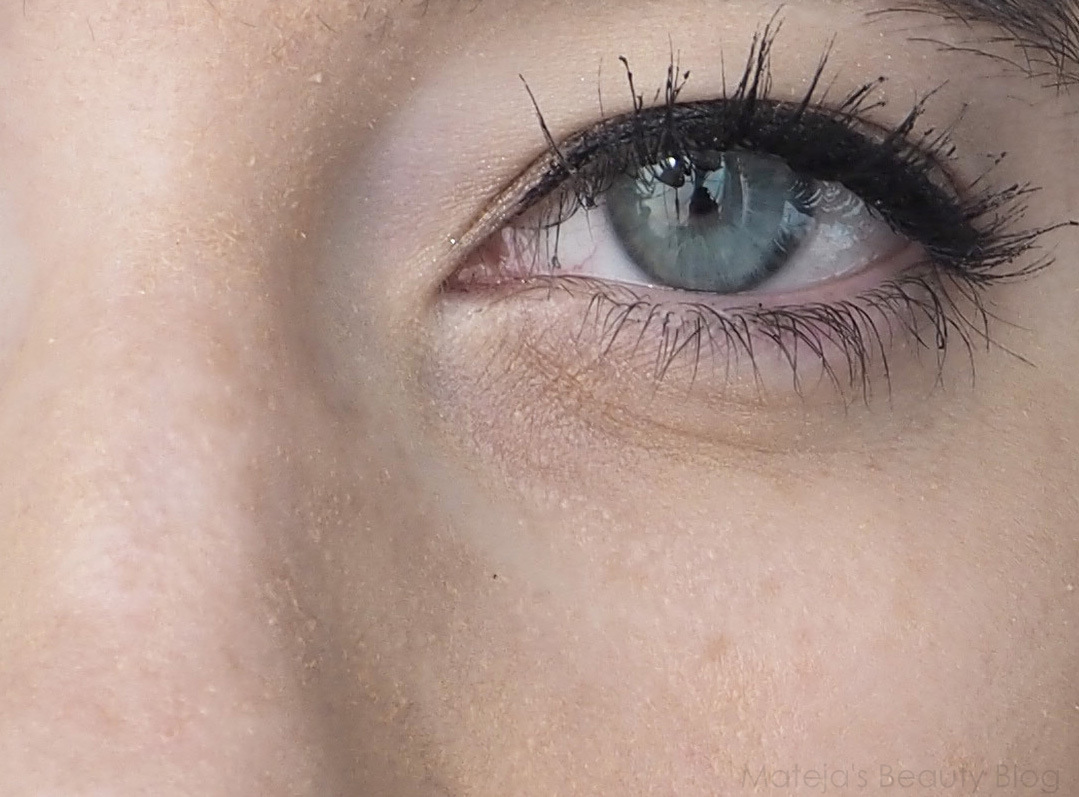 Coverage and finish: It’s got medium-full coverage, though it’s hard to me to assess its coverage properly because the shade is too dark for me. But I didn’t feel like I need to use concealer under the eyes, however for spots either another coat would be needed or a separate concealer. The finish is matte, as a promised, but it didn’t hold back the oils on my forehead for more than three hours (I don’t use powder). It a very obvious foundation, for my taste, too cakey, but you do get coverage. 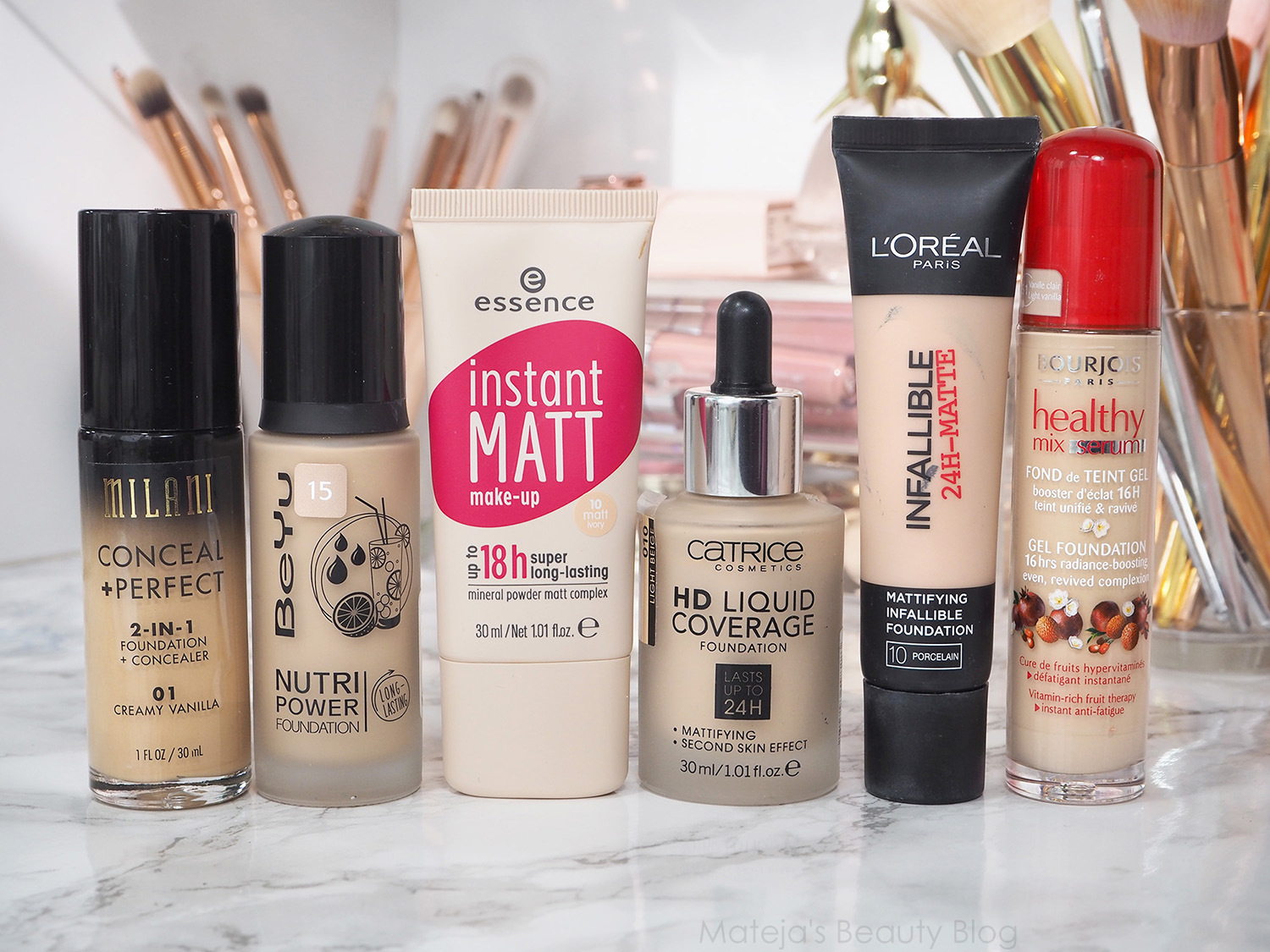 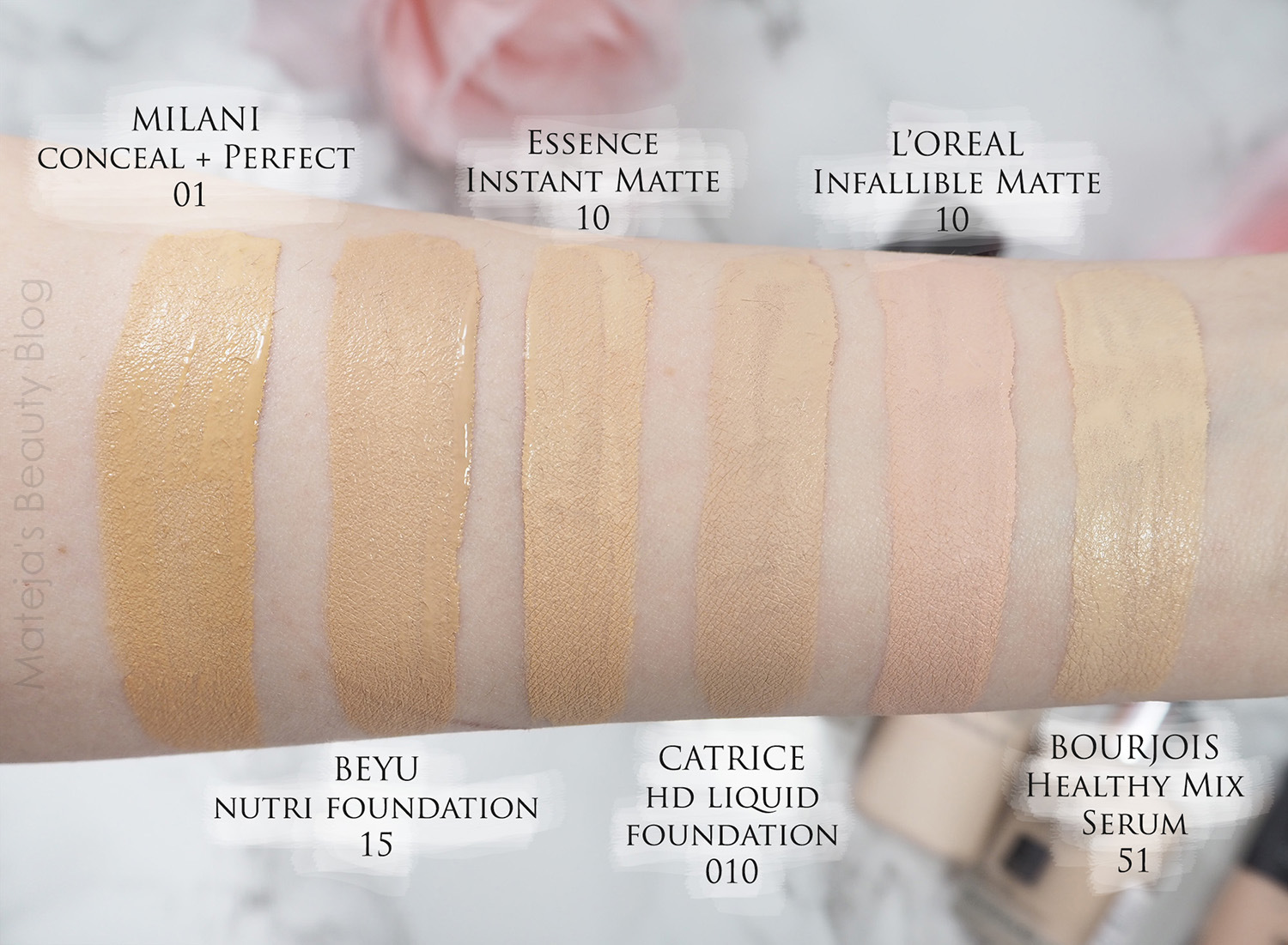 Shade: I got the lightest shade, which is as usual for Essence, only appropriate for oompa loompas. Not one foundation from Essence fit me so far, their shade ranges completely leave out anyone under NC/W20. Compared to my other similar shades, Instant Matte 10 is the most peachy-yellow, which on me looks orange people, but it’s probably around NC25-30. Catrice has much more neutral and wearable shades. In comparison Milani Conceal + Perfect 01 is a shade darker, more yellow; Beyu Nutri Power Foundation 15 is a shade darker, more neutral; Catrice HD Liquid Coverage 010 is a lot more neutral/almost a bit pink; L’Oreal Infallible 24h Matte 10 is pink, while Bourjois Healthy Mix Serum 51 is two shades lighter and yellow. 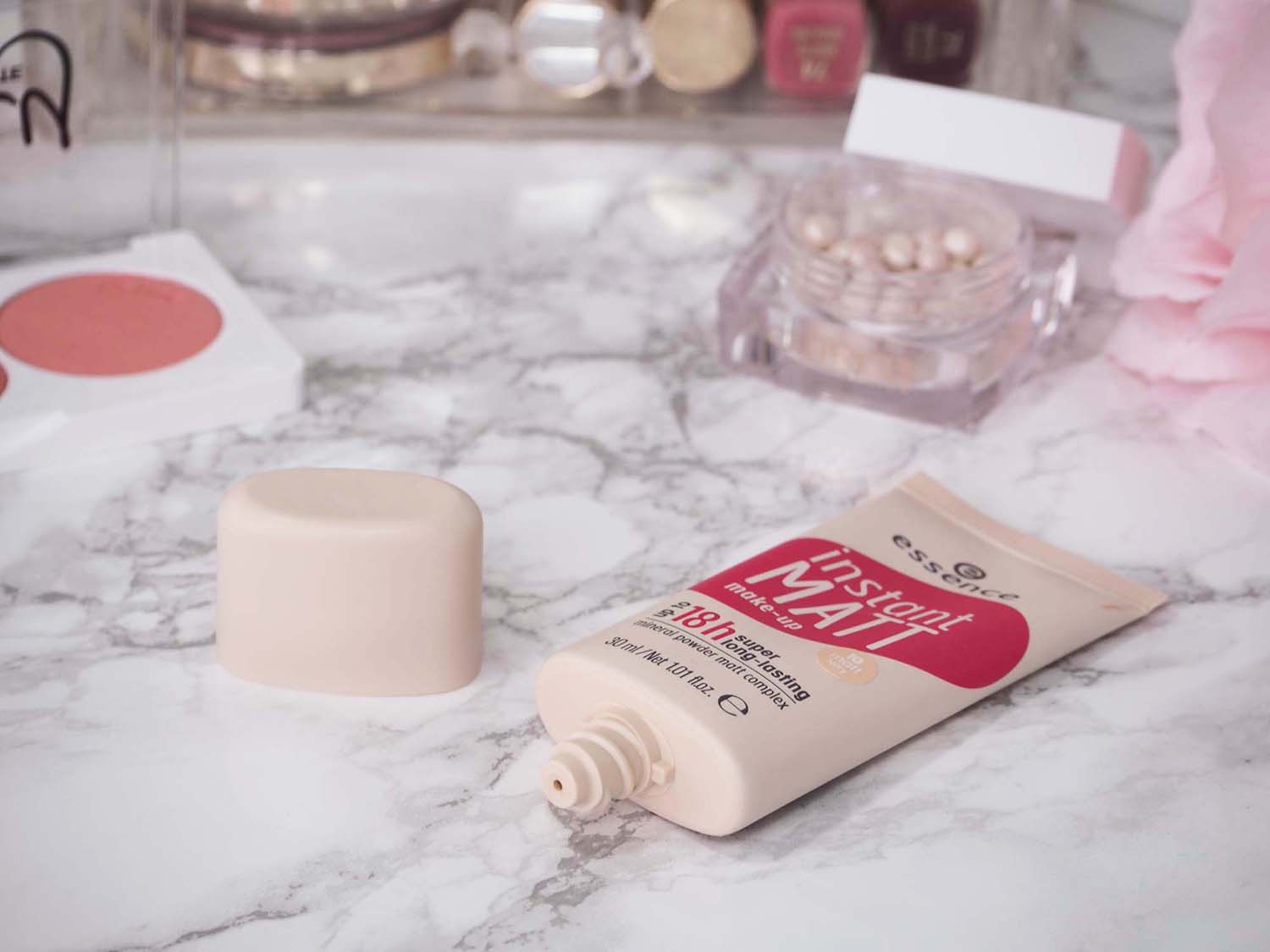 Staying Power: It lasts at least 10 hours on my combination-dry skin, but I’m not a fan of how it wears (and yes, I went all orange face for the sake of blogging for a day). When I swatched it on my hand, a makeup wipe could not remove it well and I had to scrub a lot, so it is waterproof.
Packaging: It comes in a simple, thin tube, but the product is so thick, it’s not easy to squeeze it out. Ingredients here.
Price and availability: It costs 4.39 € in drugstores and supermarkets. 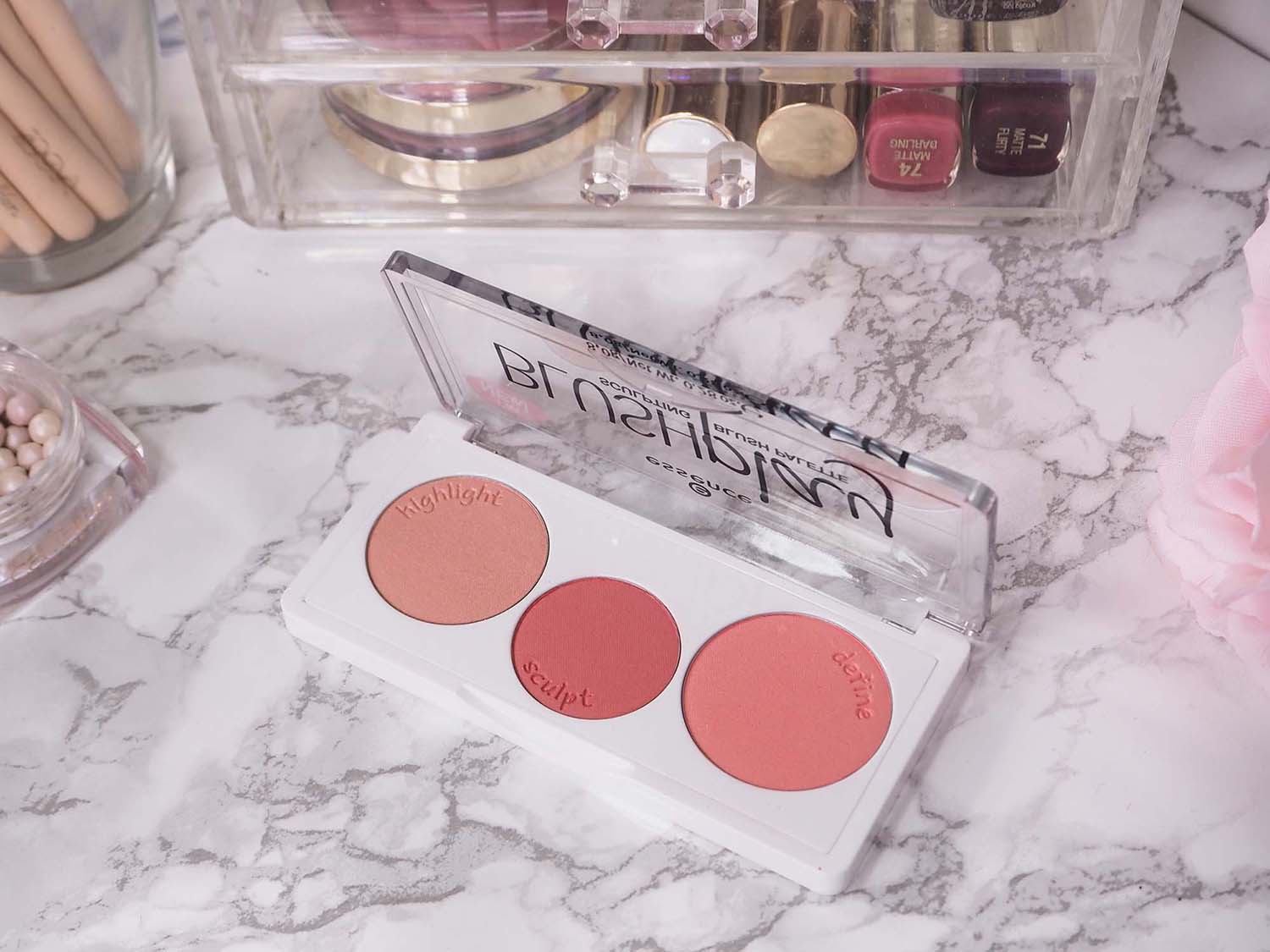 Blush Play Sculpting Blush Palette
10 Play it Peach
Just like L’Oreal, Essence decide to do a selection of blushes with which you should be able to create a 3D effect or more plump looking cheeks. I tried it that way, but everything blends in together like always, so I find it pointless to bother with such application, however, all these blushes work excellently on their own. 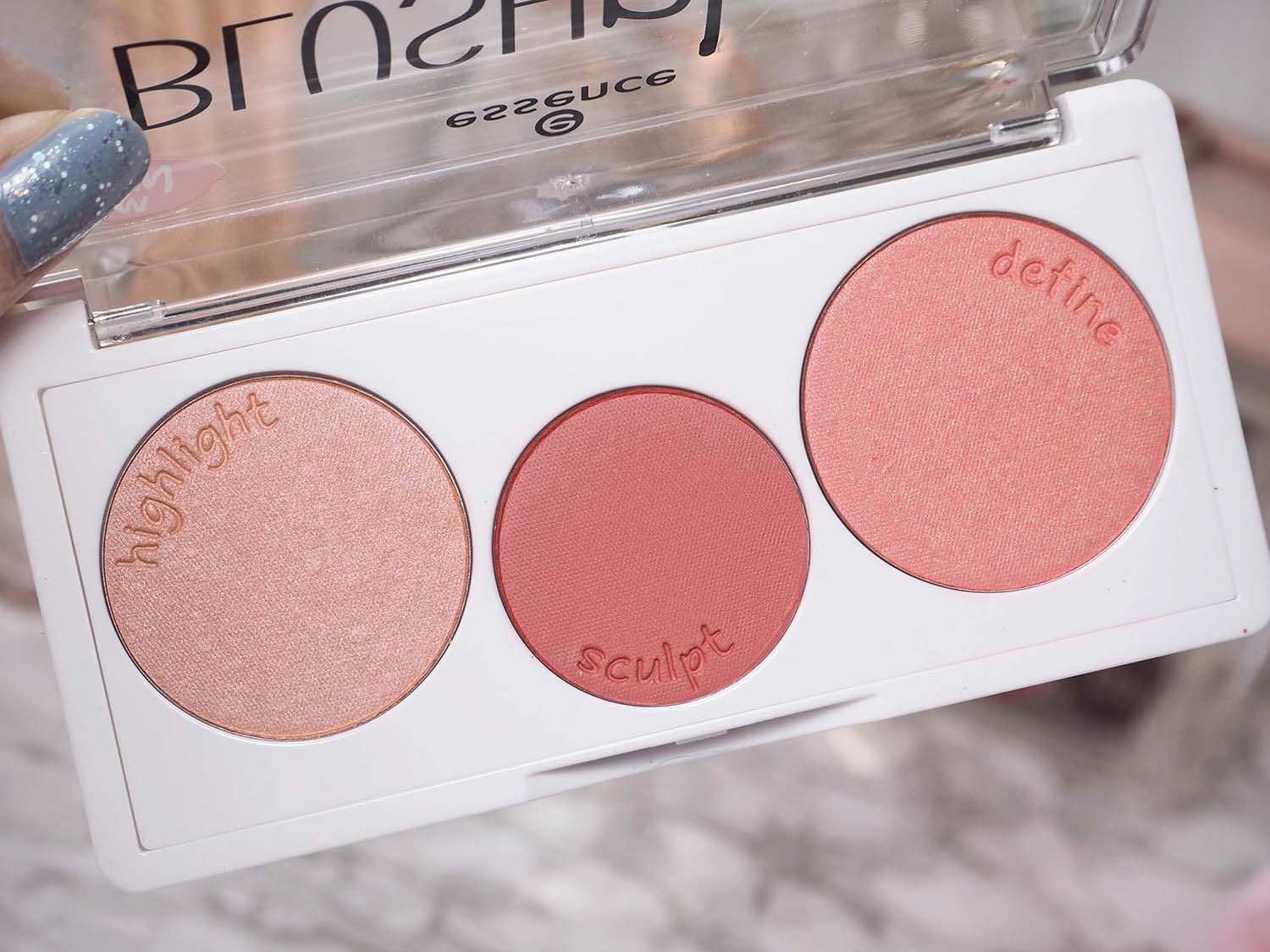 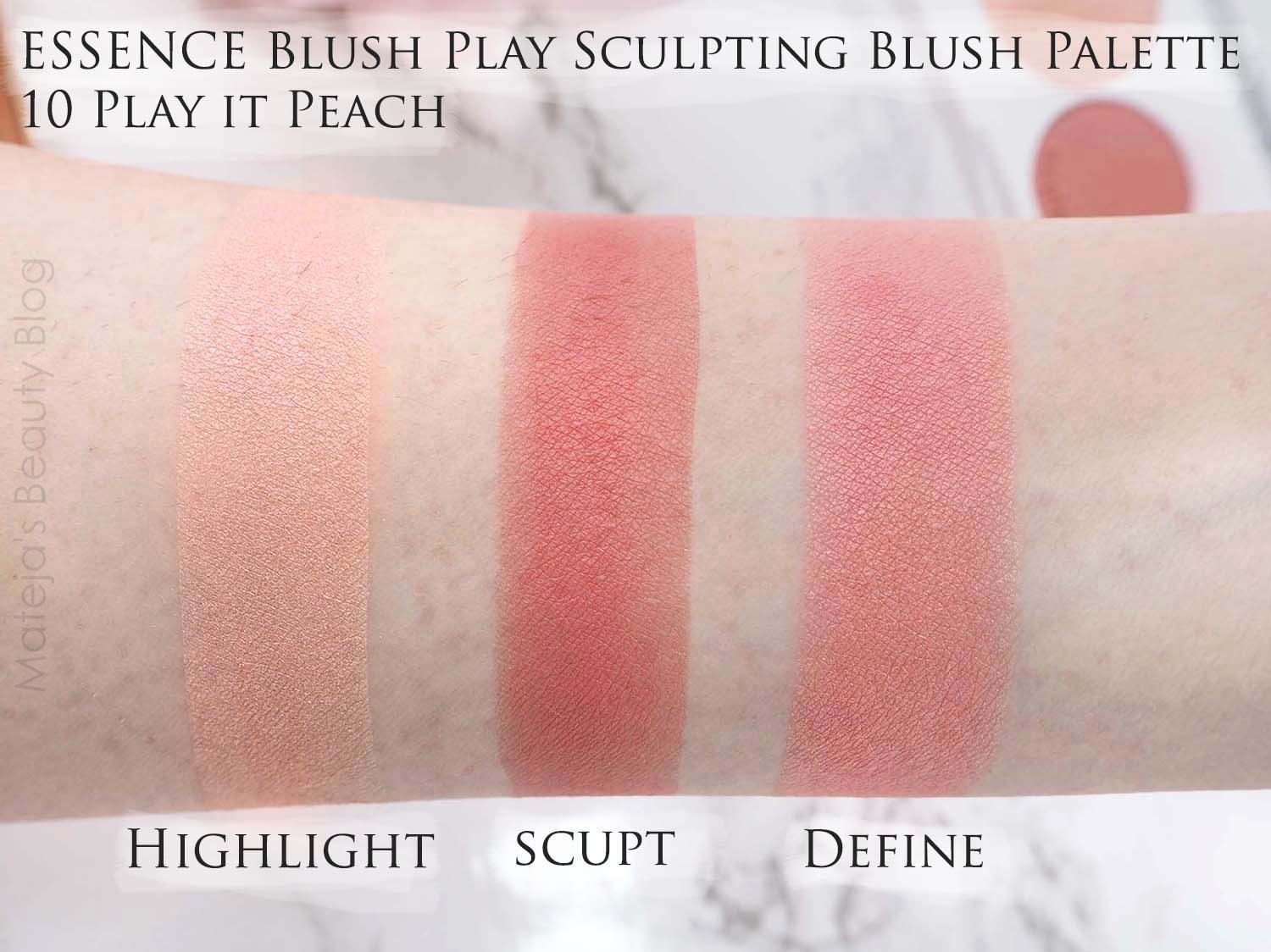 Highlight: for my skin tone this isn’t a highlight, but a pale peach blush with a glowy finish. The texture is nice and soft.
Sculpt: a matte, dirty peachy-pink shade. The texture is the hardest of the three and it needs a couple more swipes, but it’s the shade I like most.
Define: a bright peachy-pink with a glowy-satin finish. It’s got a very lovely soft, blendable texture. 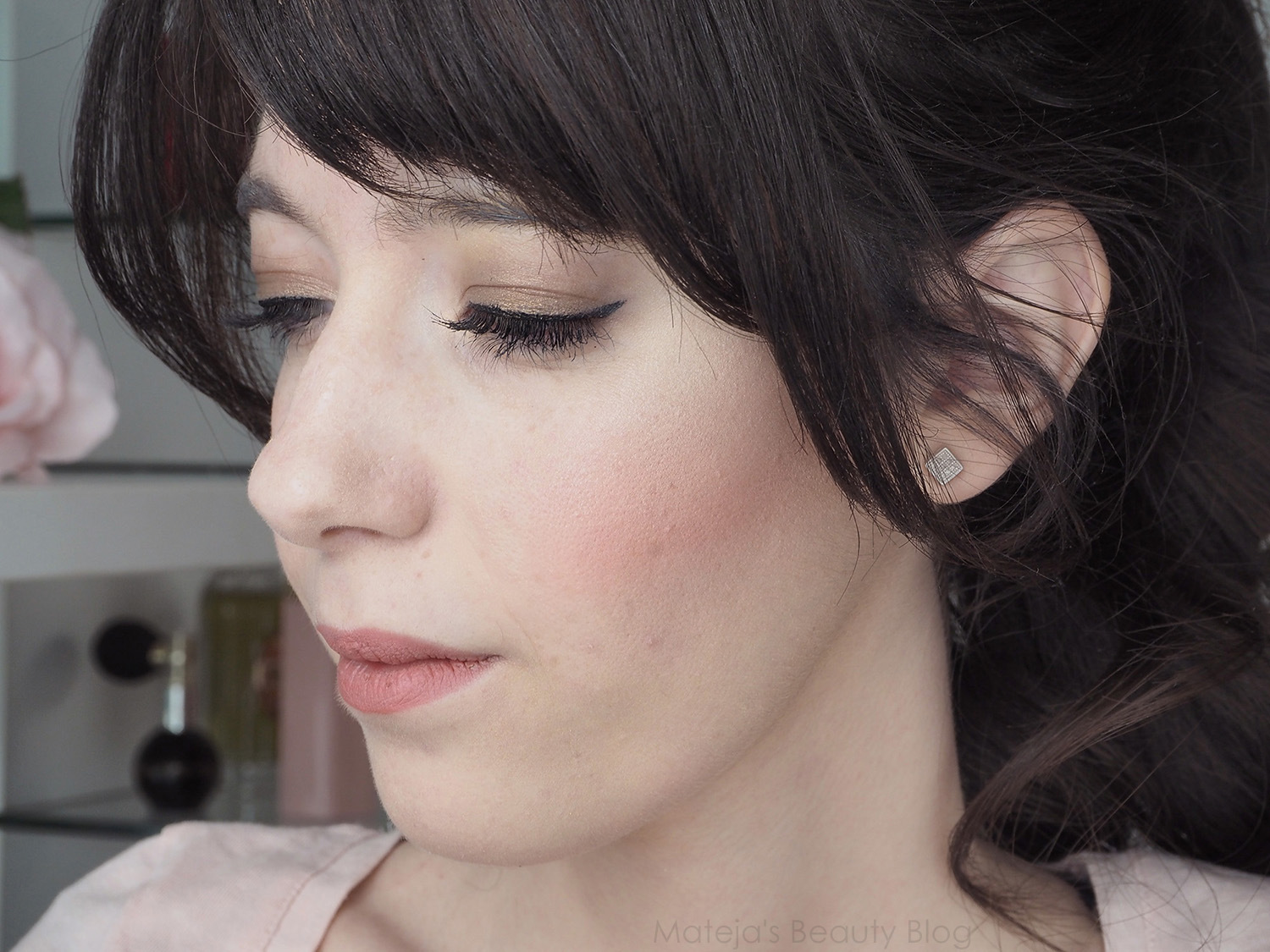 Using all three shades. On the lips Catrice Longlasting Lip Pencil in 070 I got you Babel.
A very likeable palette for the price and it’s my favourite from the new products I tried, but the colours are pretty basic. It costs 4.39 € 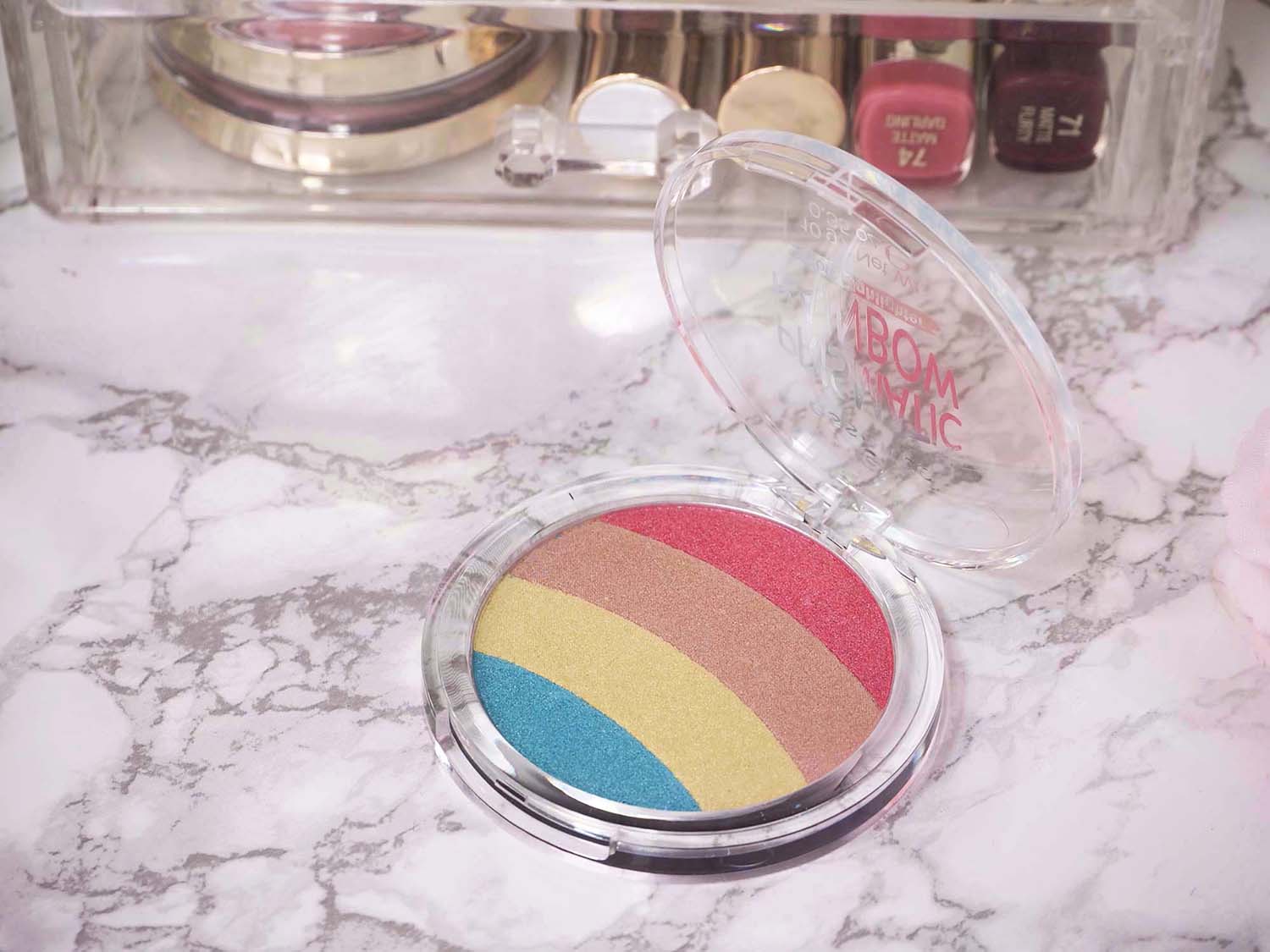 Prismatic Rainbow Glow Highlighter
10 Be a Unicorn
So rainbow highlighters actually became a thing, who would have thought. I’m not sure if Bitter Lace Beauty on Etzy was the original creator, but once Wet n Wild picked up on the idea these became super popular and Essence is quick to jump on the bandwagon. I dislike the idea of rainbows on my cheeks, but that doesn’t matter at the moment.
Essence created a version with only four colours, so you don’t get the same effect as Wet n Wild’s for example and both the stripes as well as the packaging itself are too wide for swiping the brush in all shades at once and creating a rainbow effect on the cheeks, but I think that Essence meant it to be mixed anyway. 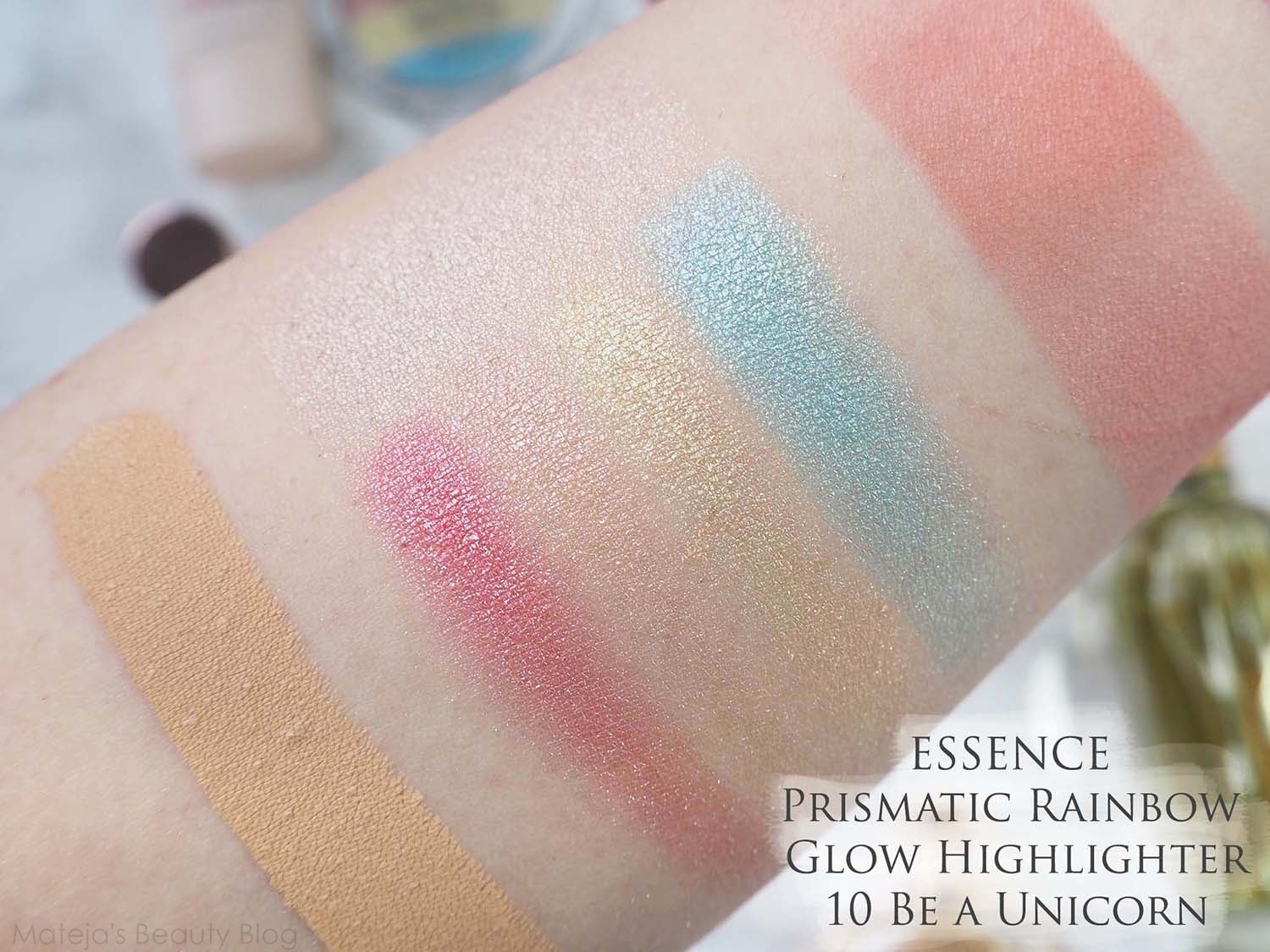 As I said you get four colours: a blue, yellow gold, peach and red-pink. Blue and red are very intense, you can use them as eyeshadows if you wish, especially if you wet the brush, but the other two shades are very classic warm highlighters. Mixed together you get a champagne highlight (I hope you can see it well on the swatches above), on my cheeks on the picture it looks a bit blue because my brush concentrated on the blue shade last, so actually if you wish you can custom mix the desired shades. I applied it in stripes too just for the pictures, but I had to use an eyeshadow brush. The glow is nice, however, I feel for true glow lovers it’ll be too weak. The shimmer isn’t obvious, but it could be more fine. 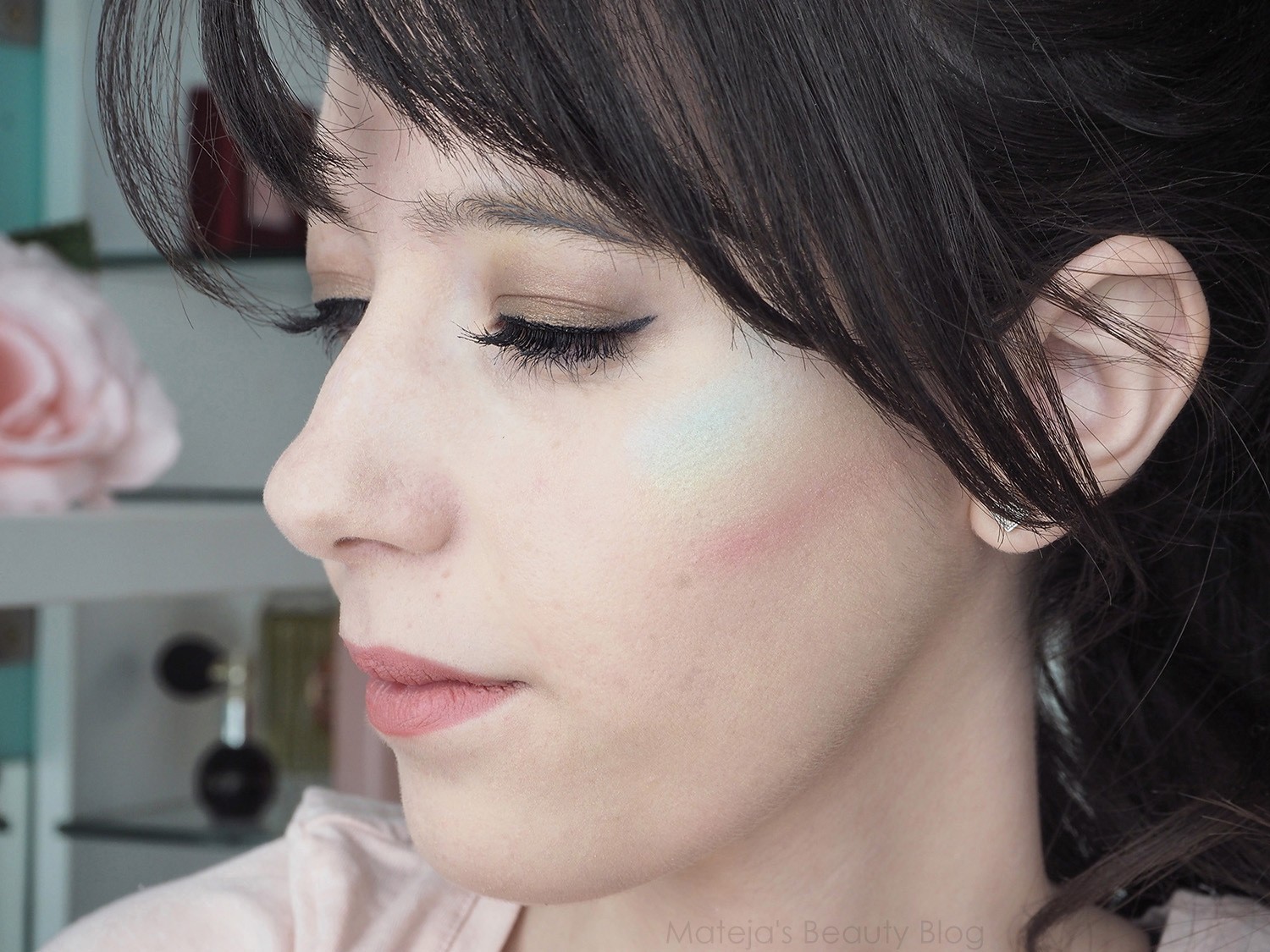 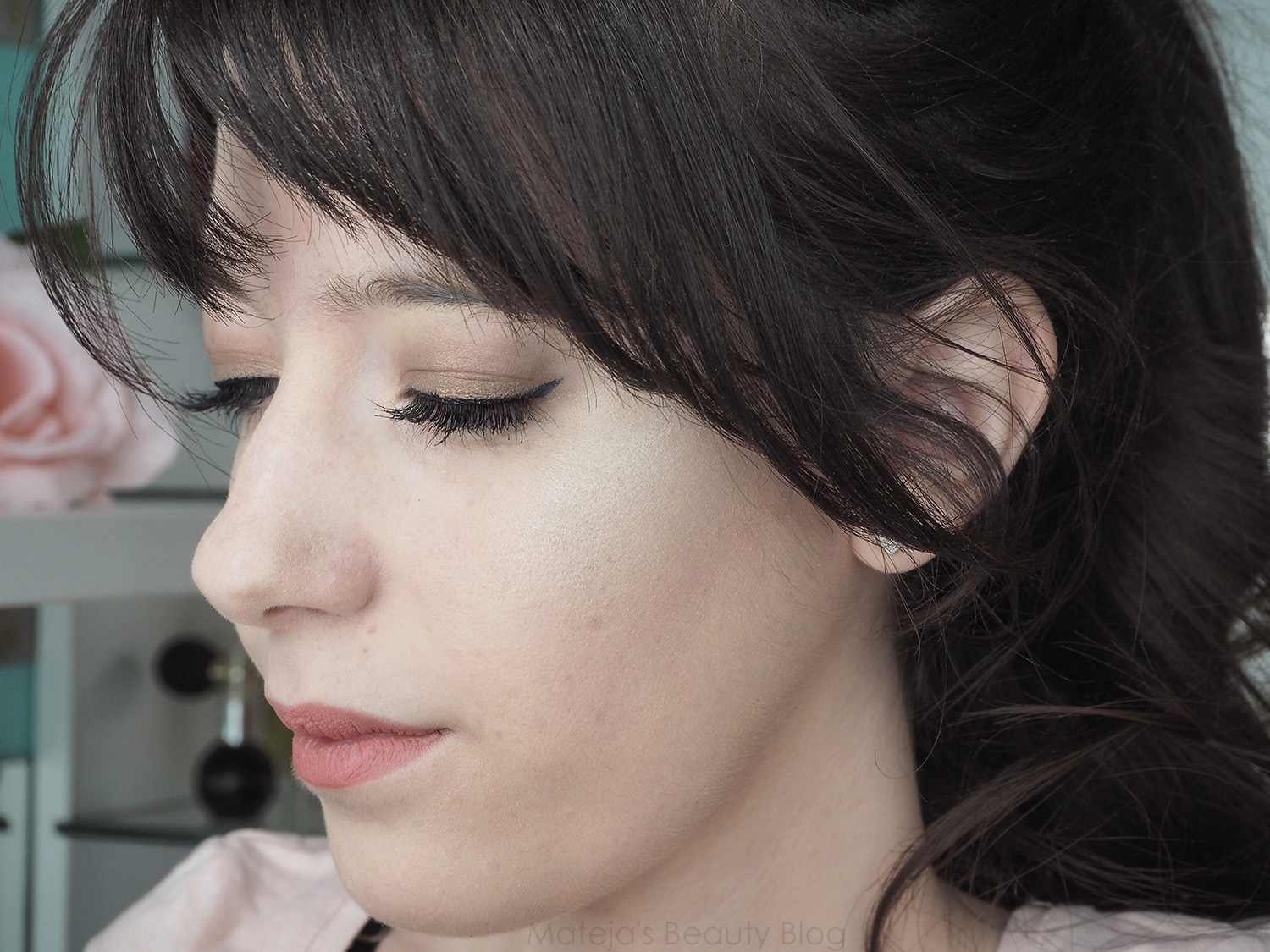 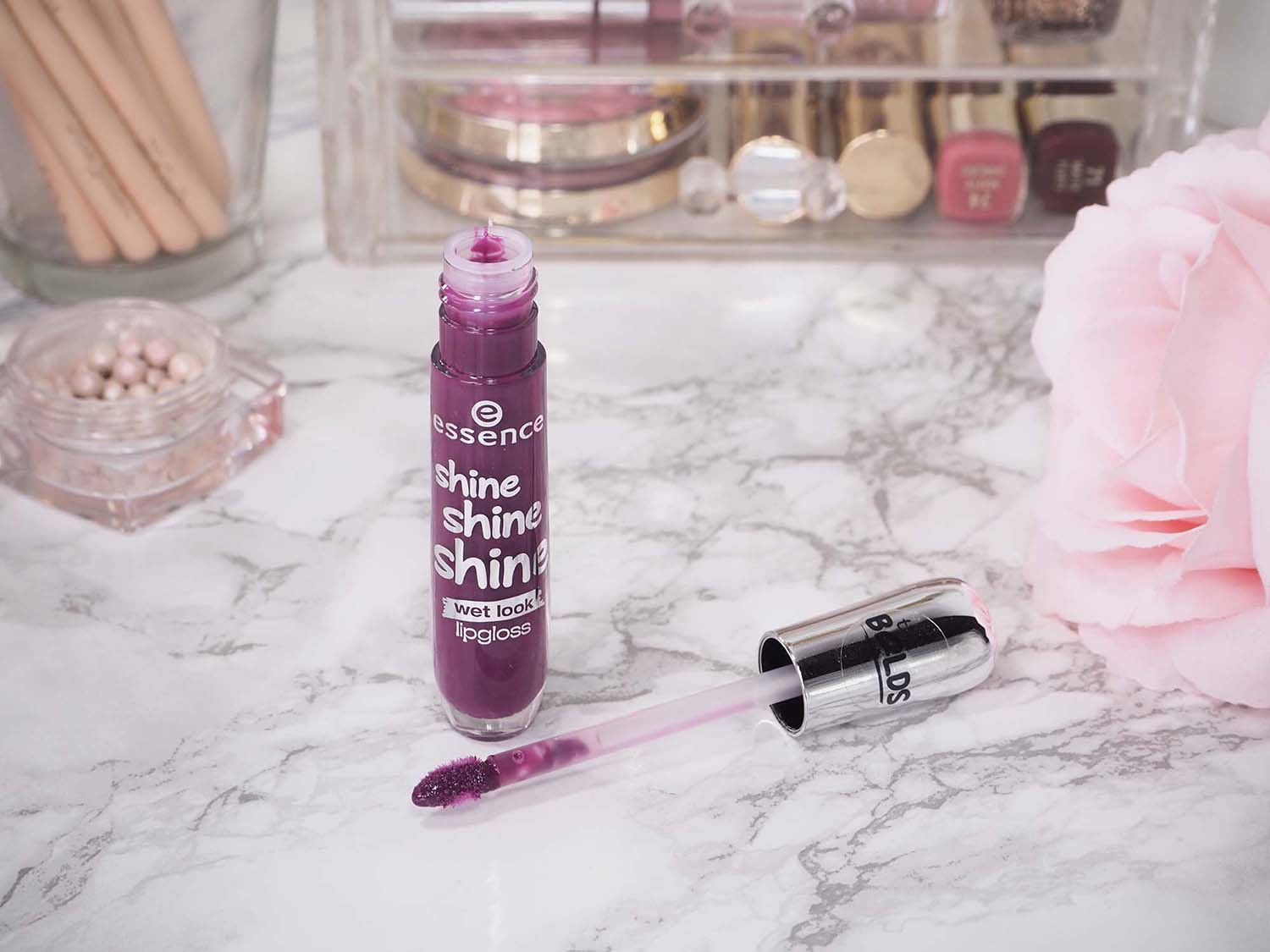 New on Essence stands are lines of lip glosses, one of them are Shine, Shine, Shine, which honestly are the about same as all the lip glosses they had before. Essence does decent lip glosses – not sticky, they don’t go all weird during the day and have some colour, so you don’t just get a bunch of clear shades in disguise.
12 Runway, your Way is a basic purple and a type of shade that’s on the warm side. Pigmentation is semi-opaque, but as it wears, it quickly turns into more of a stain. It’s got a gentle fruity scent that’s typical of Essence. 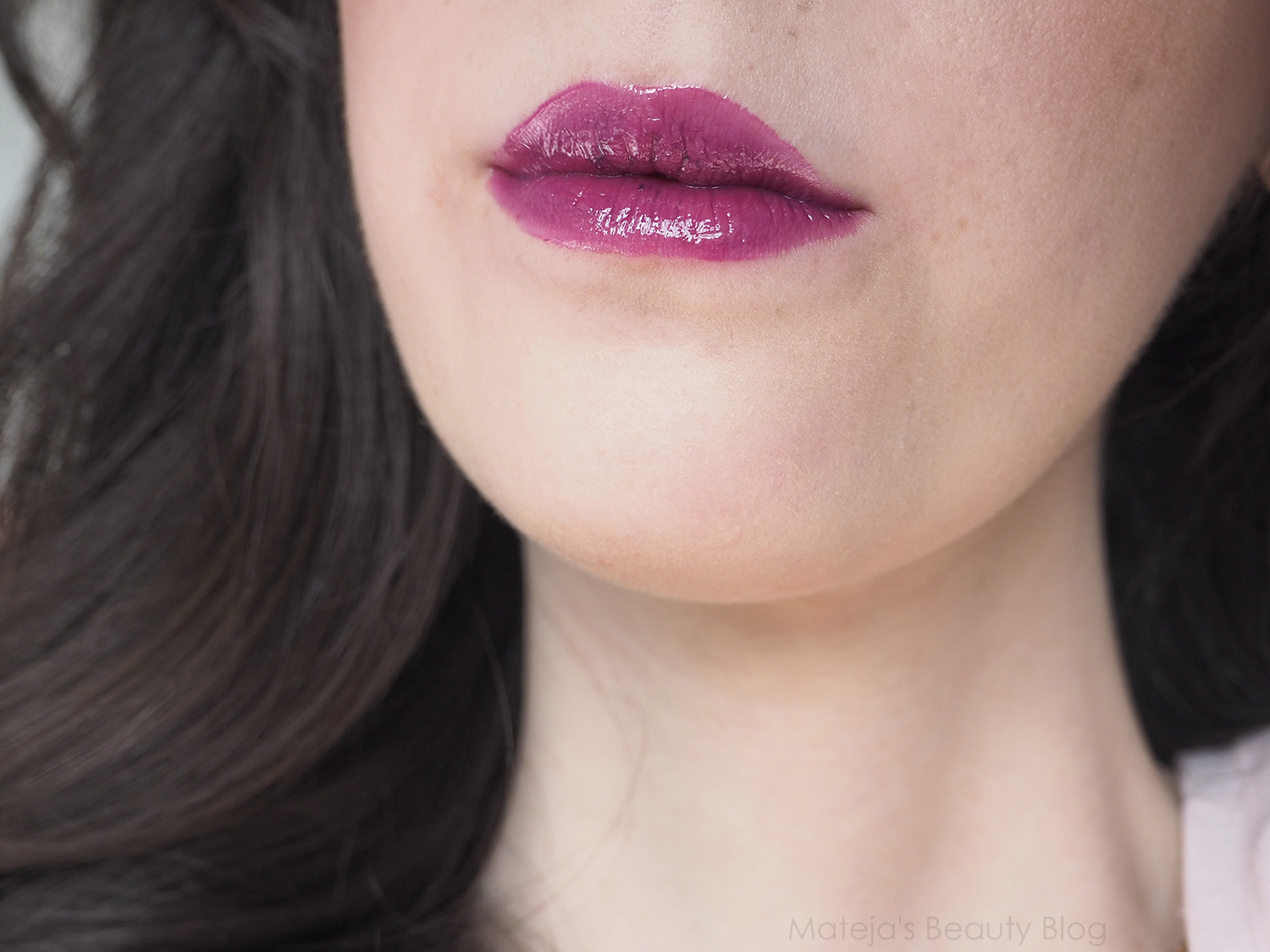 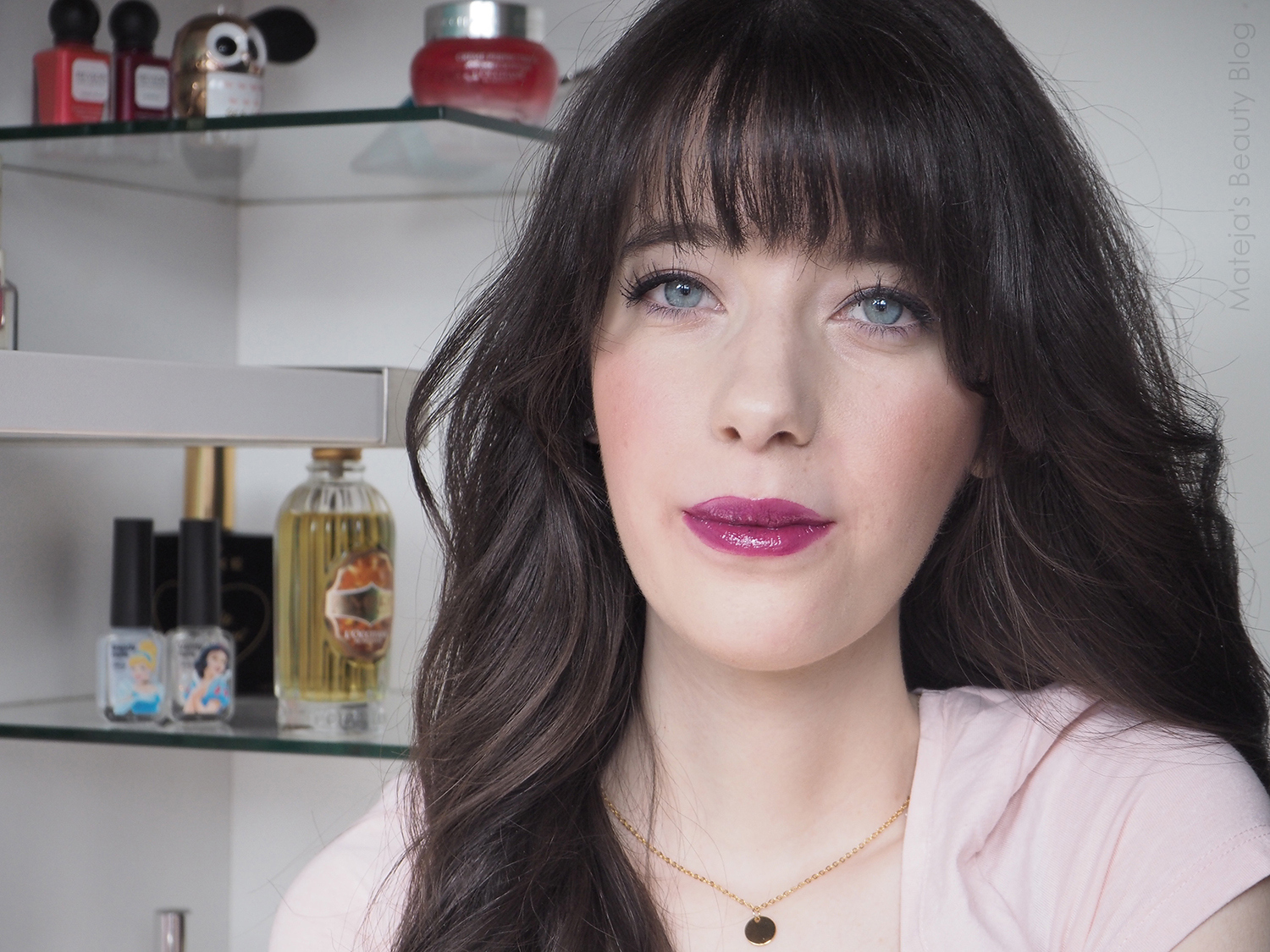 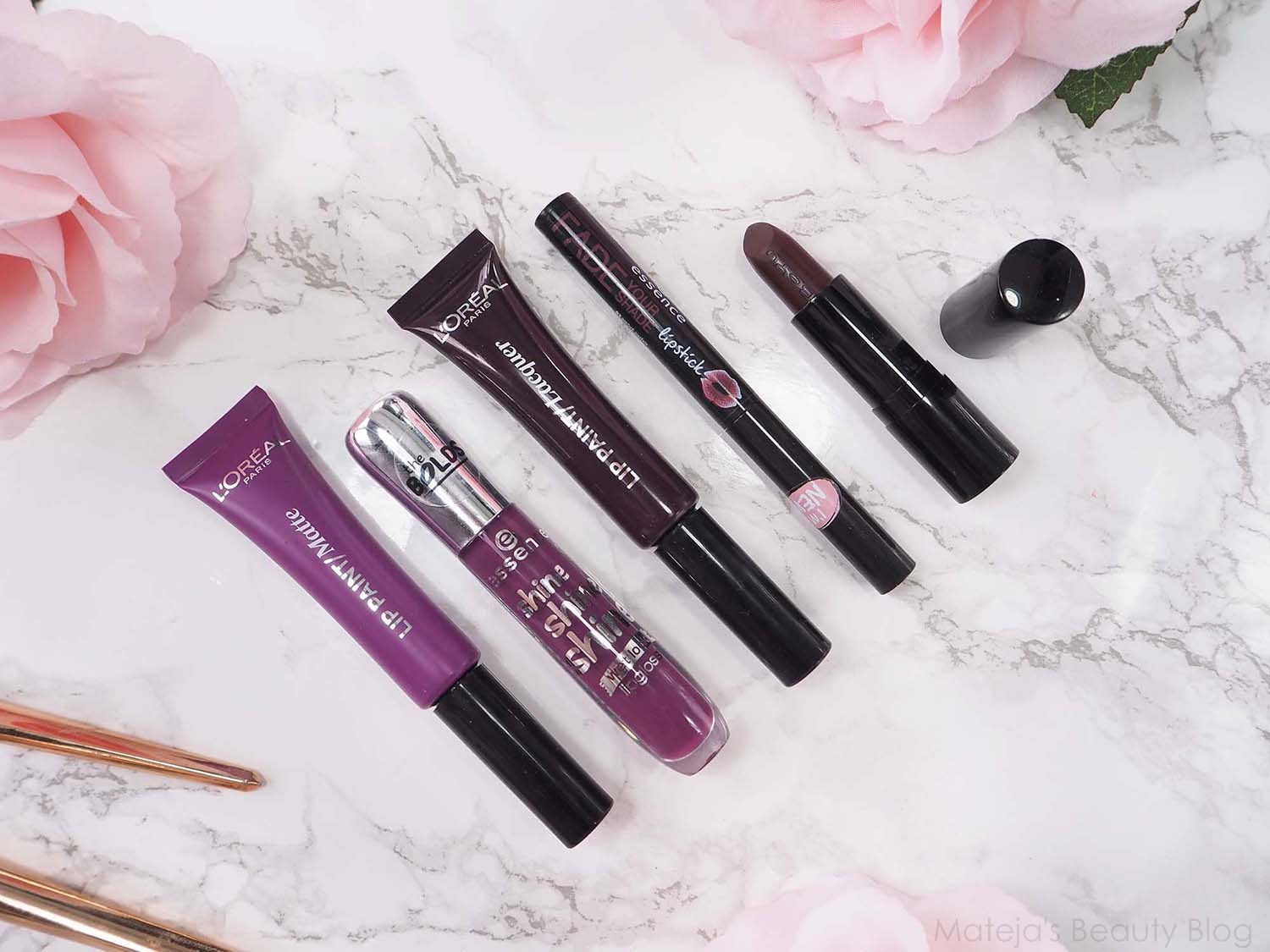 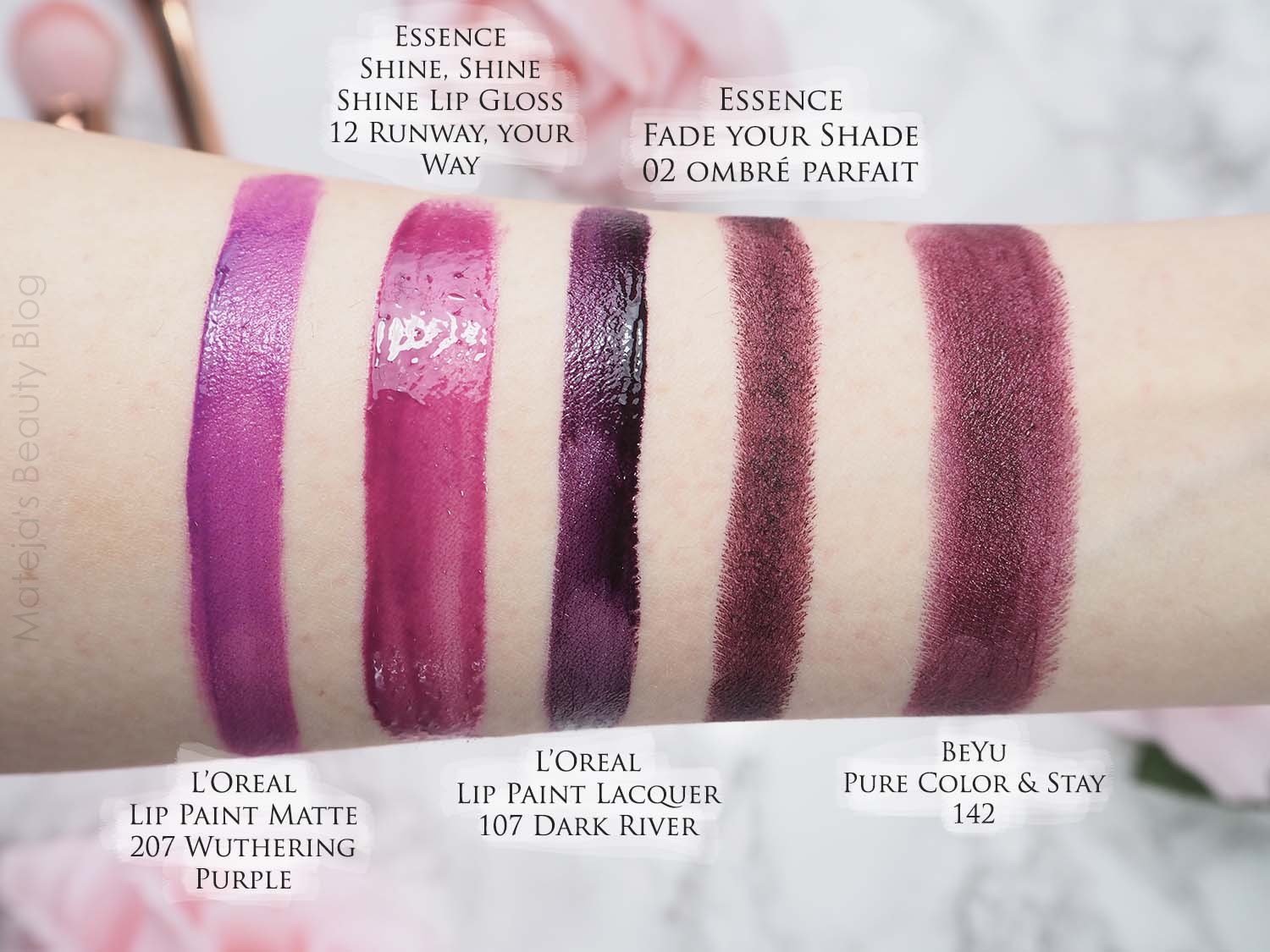 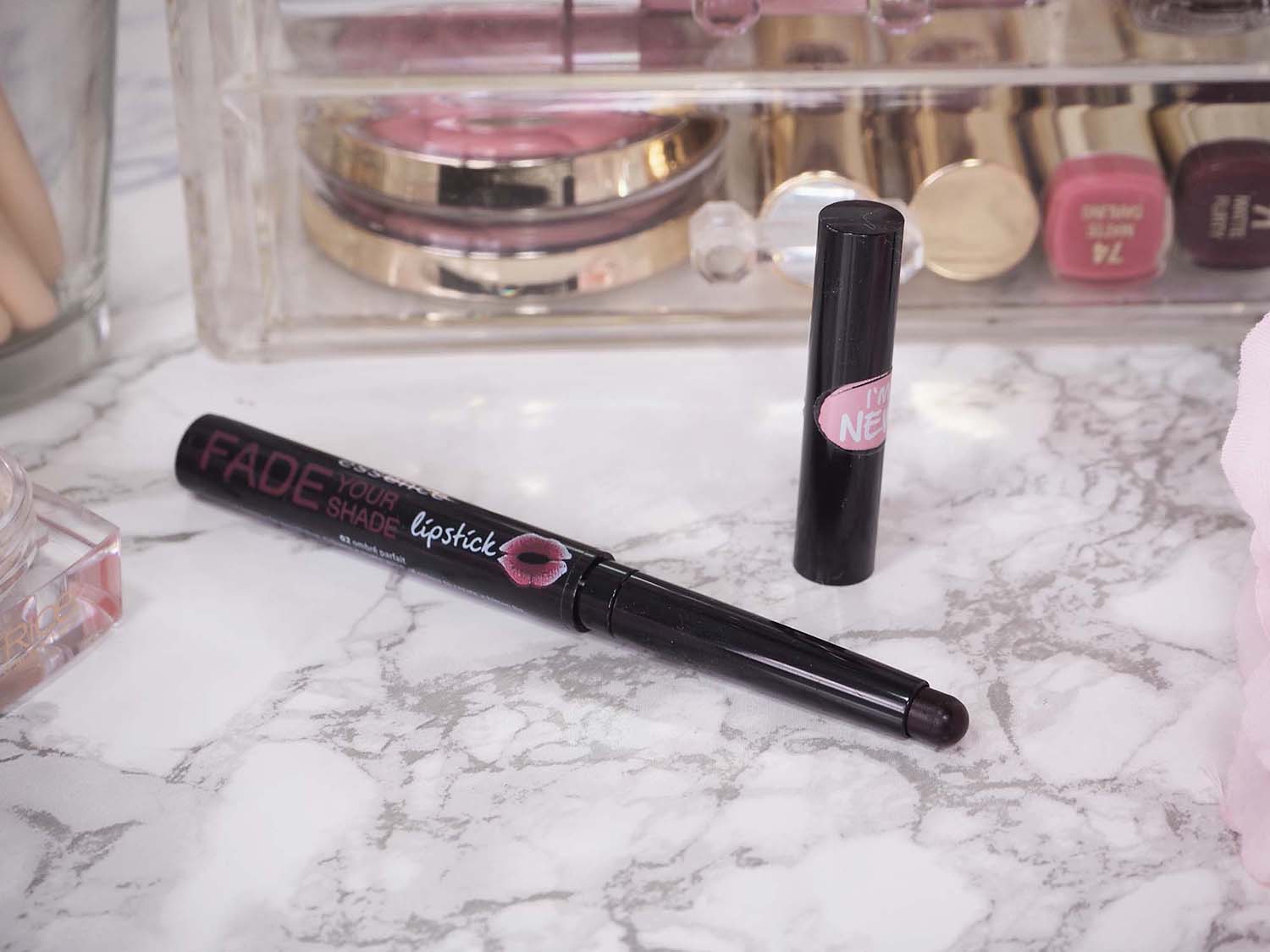 There are actually two shades of these, one is white and this one is a vampy shade. They are meant to be used as top coats, so this one you apply just in the centre of the lips, then blend it out to create an ombre effect. But 02 works like a normal lipstick and that’s how I swatched it.
02 ombré parfait is a very deep plum burgundy shade, well almost black (Essence just calls it black-red). It’s the deepest such shade in my collection, so if you’re looking for a true vampy shade, this one is nice and cheap. 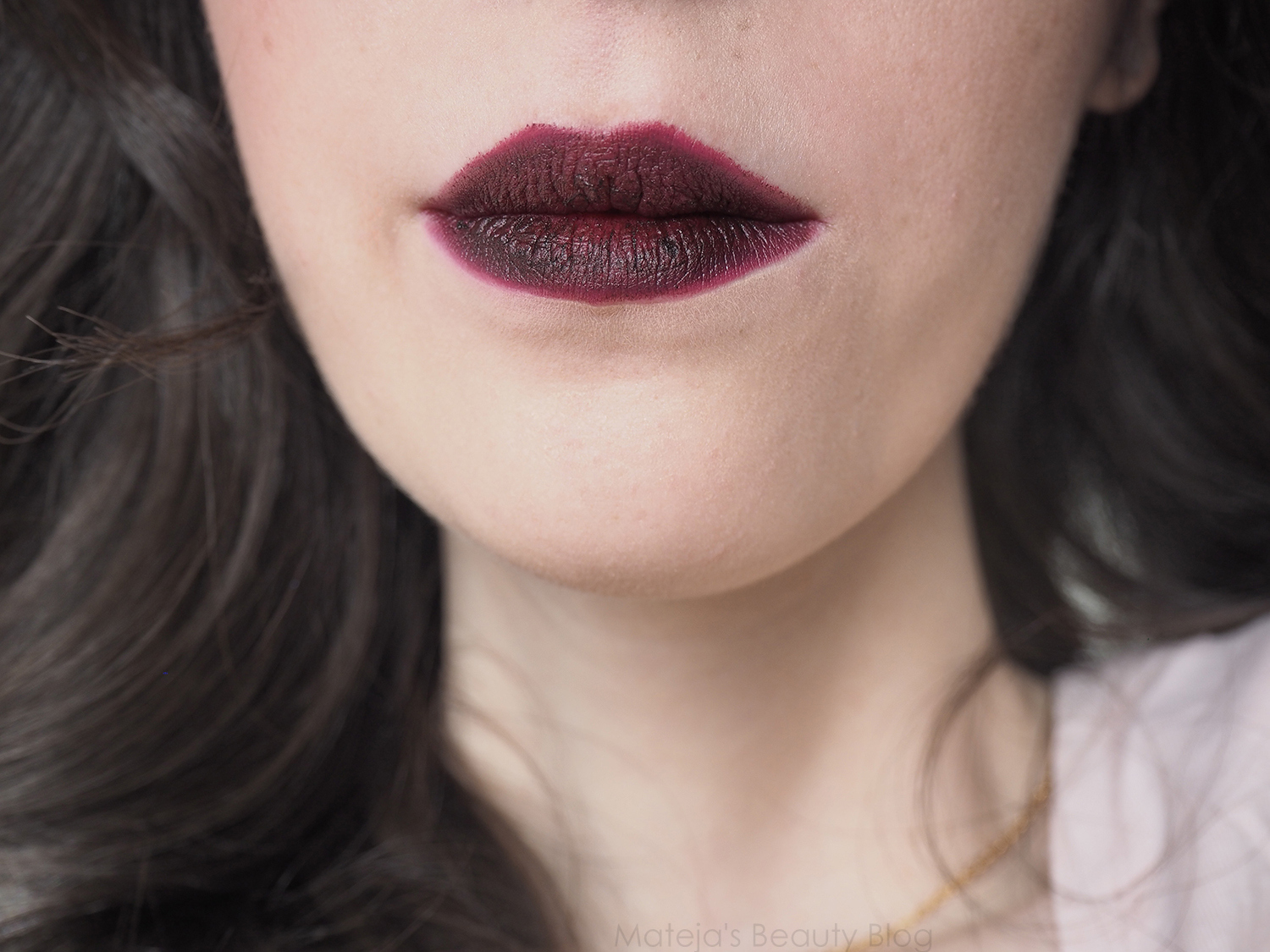 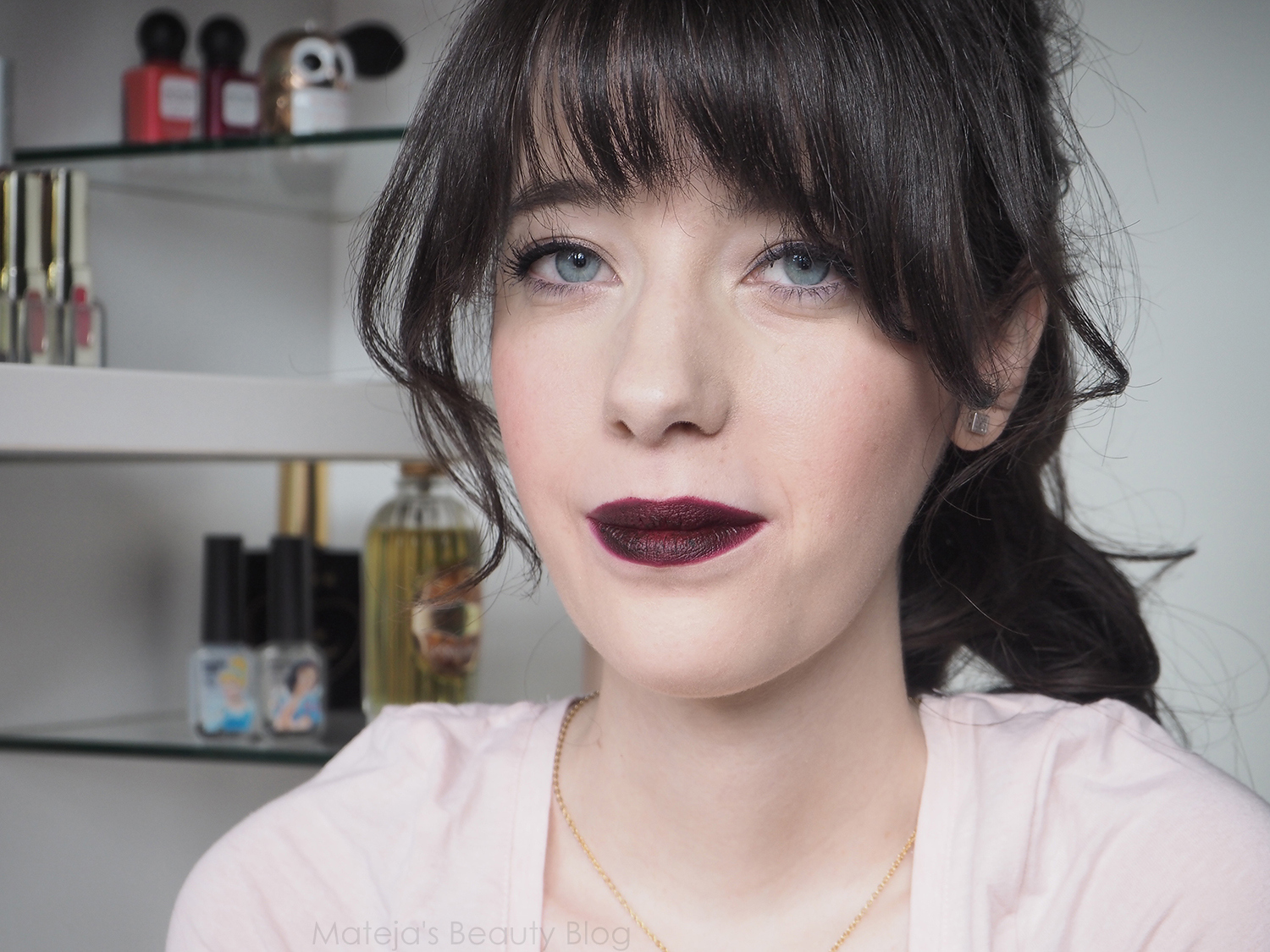 The formula is thick, matte and completely opaque. It’s not easy to blend, but instead you get a long-lasting lipstick that doesn’t smudge much. If you plan to wear it on its own, it might feel drying to some.
The packaging is like an eyeshadow stick and you don’t get the most precise application. Lip liner is needed if you’re not planning to go ombre.
It costs 2.99 €.
*PR products.