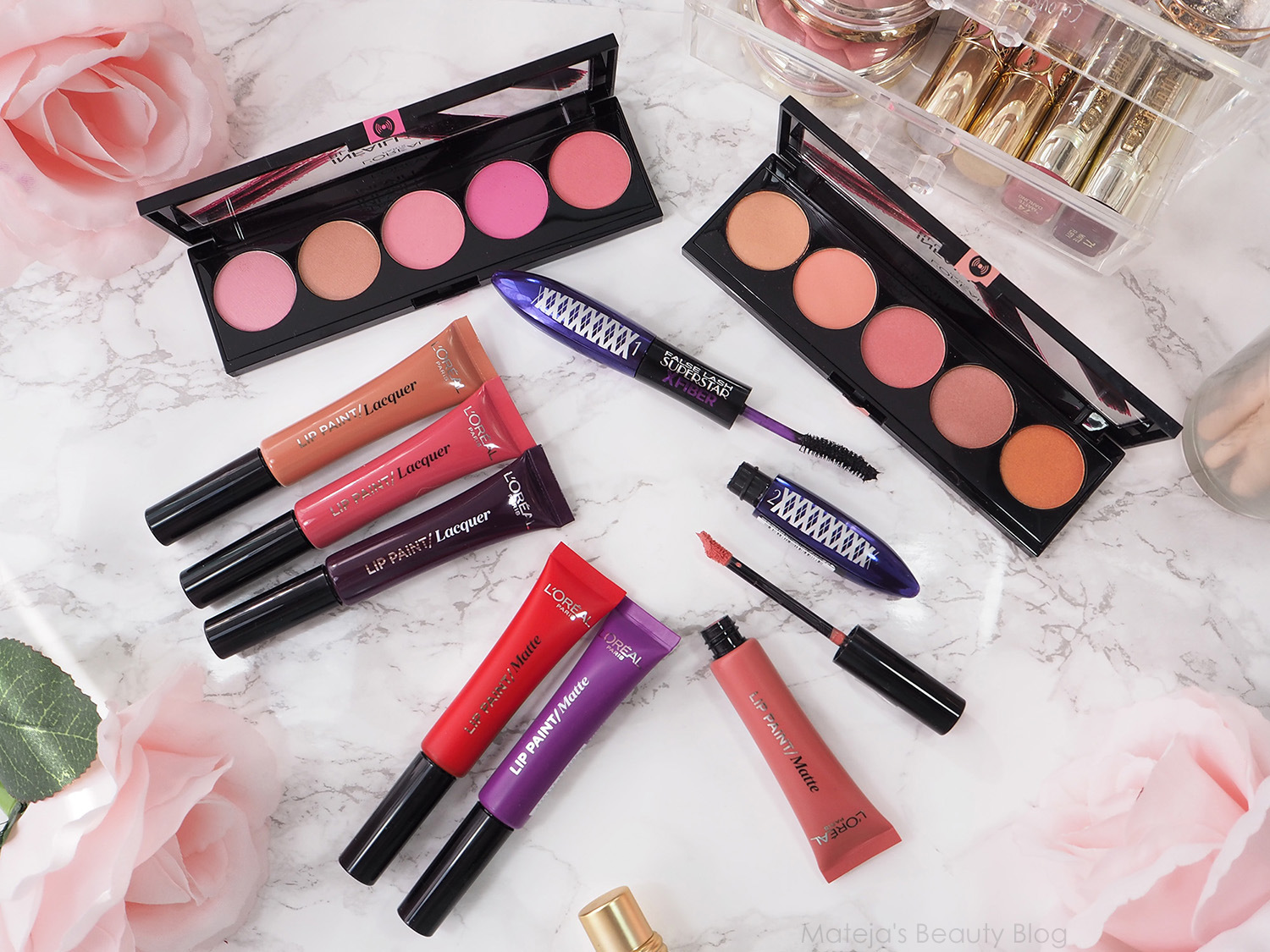 New L’Oreal products already hit the shelves in the past month, so I got them to review and of course swatch. I just chucked everything in one post, so ahead are a lot of pictures, but I hope you find them helpful. 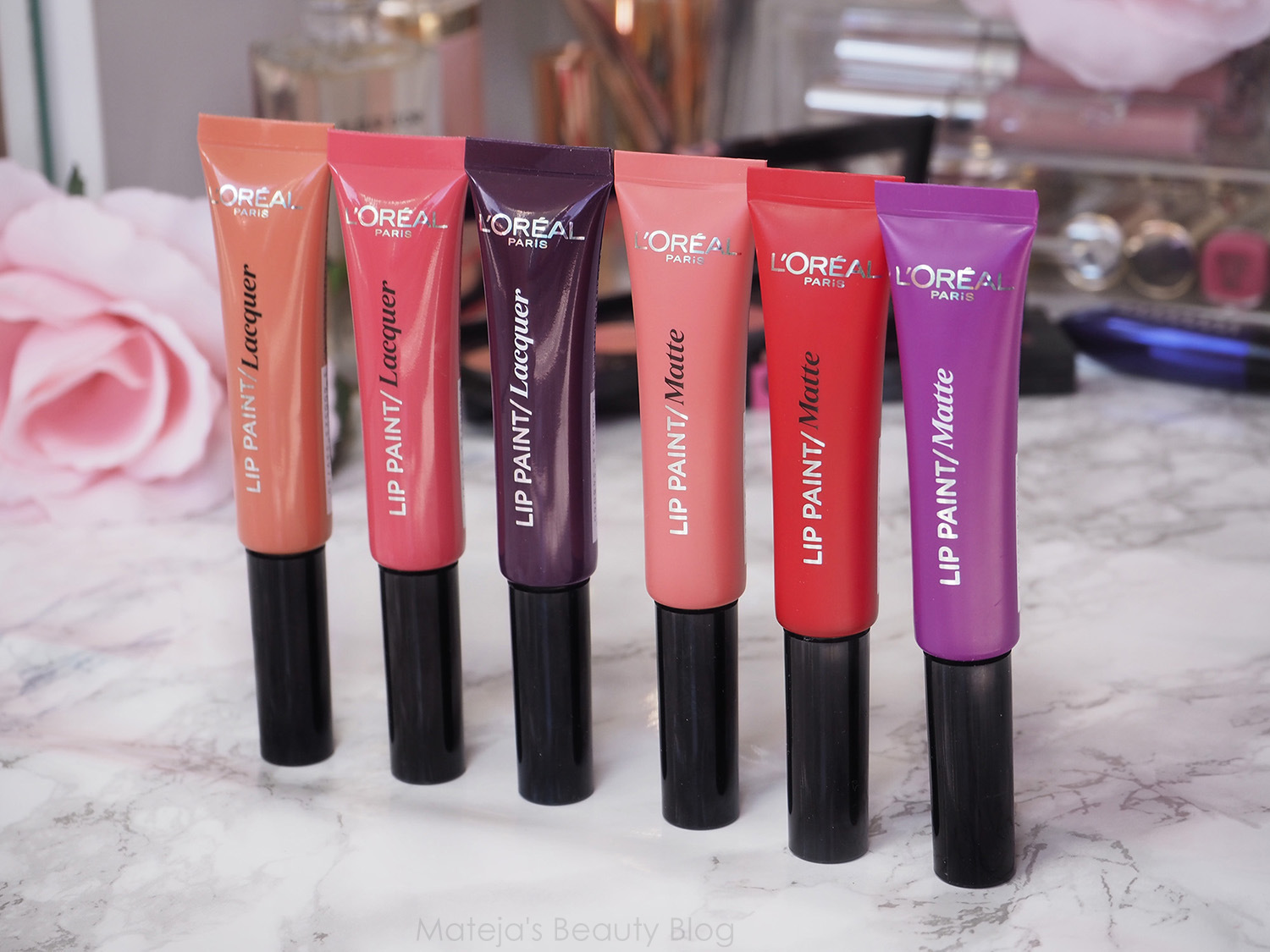 Among the new products by L’Oreal are Lip Paints which are available in Matte and Lacquer finish. The formulas are different, but the packaging is the same and both come in tubes with a doe foot applicator that is cut in a curve which fits the contours of the lips. All Paints have a sweet floral fragrance that isn’t overpowering. Both versions cost 7.99 € in Slovenia.

Swatches of the first three are Matte, following are the Lacquers: 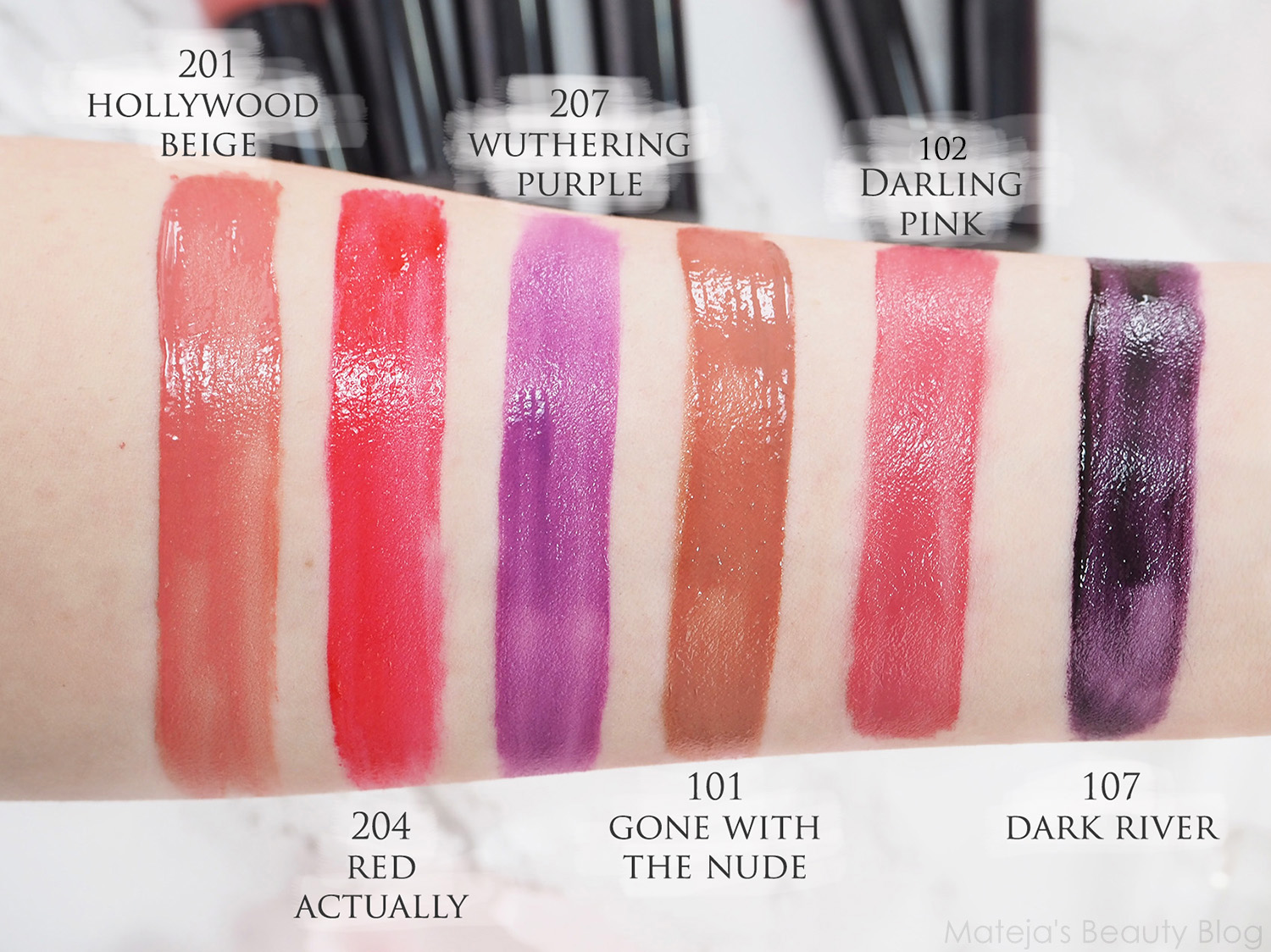 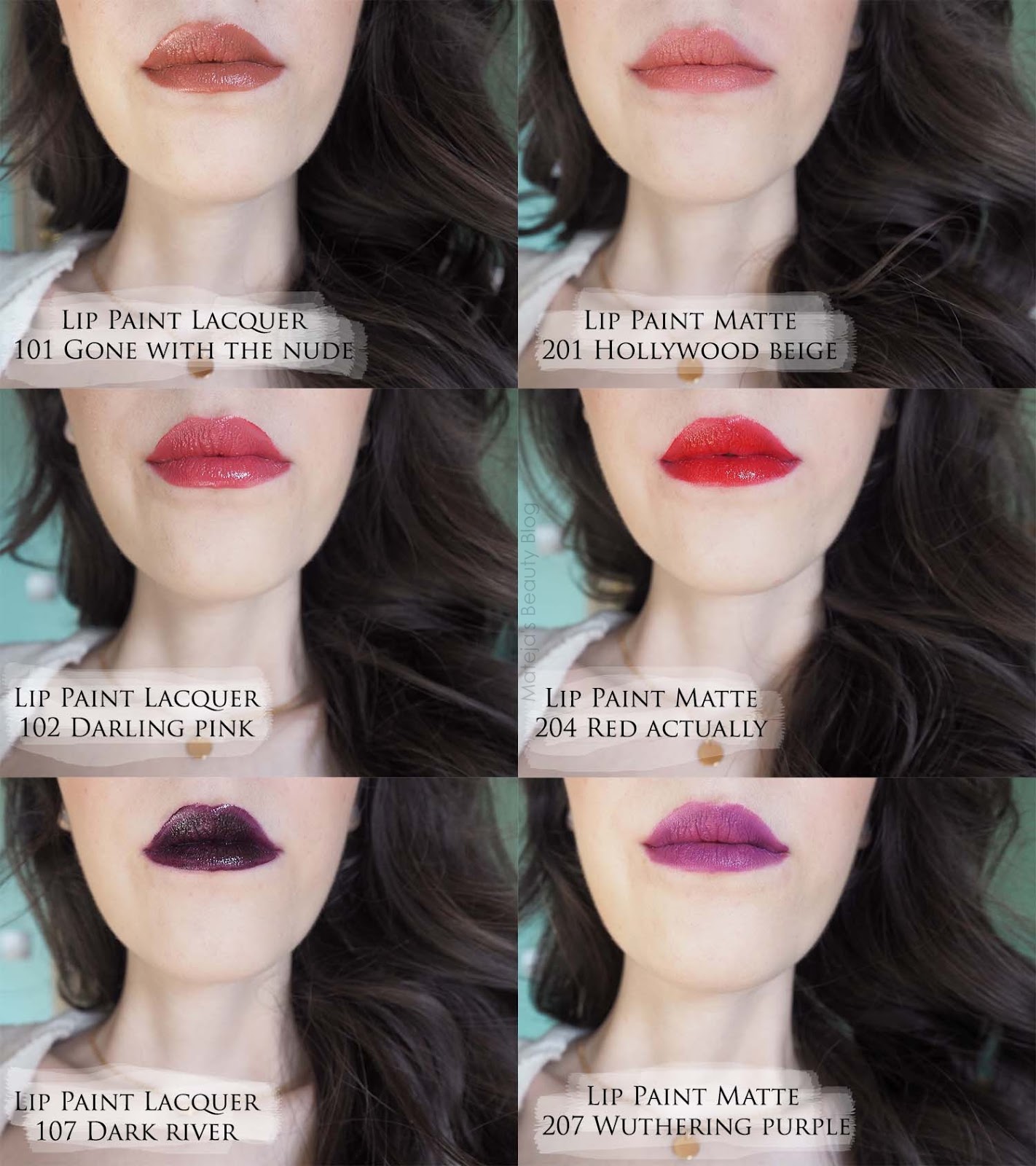 Lip Paint Lacquers
Lip Lacquers live up to their name – they are liquid lipsticks with a creamy-glossy finish. Pigmentation is opaque, especially Darling Pink is a stellar performer, but as expected the vampy Dark River is not an easy shade to apply despite good pigmentation. They somewhat remind me of Rimmel’s Apocalips which have the same type of formula and finish. Formula is comfortable to wear and lasts impressively well for a creamy-glossy finish, I got at least four hours, but even after that the remaining stain looks great. I like these more than the Matte version because I prefer the more even, easy application.
101 Gone with the nude 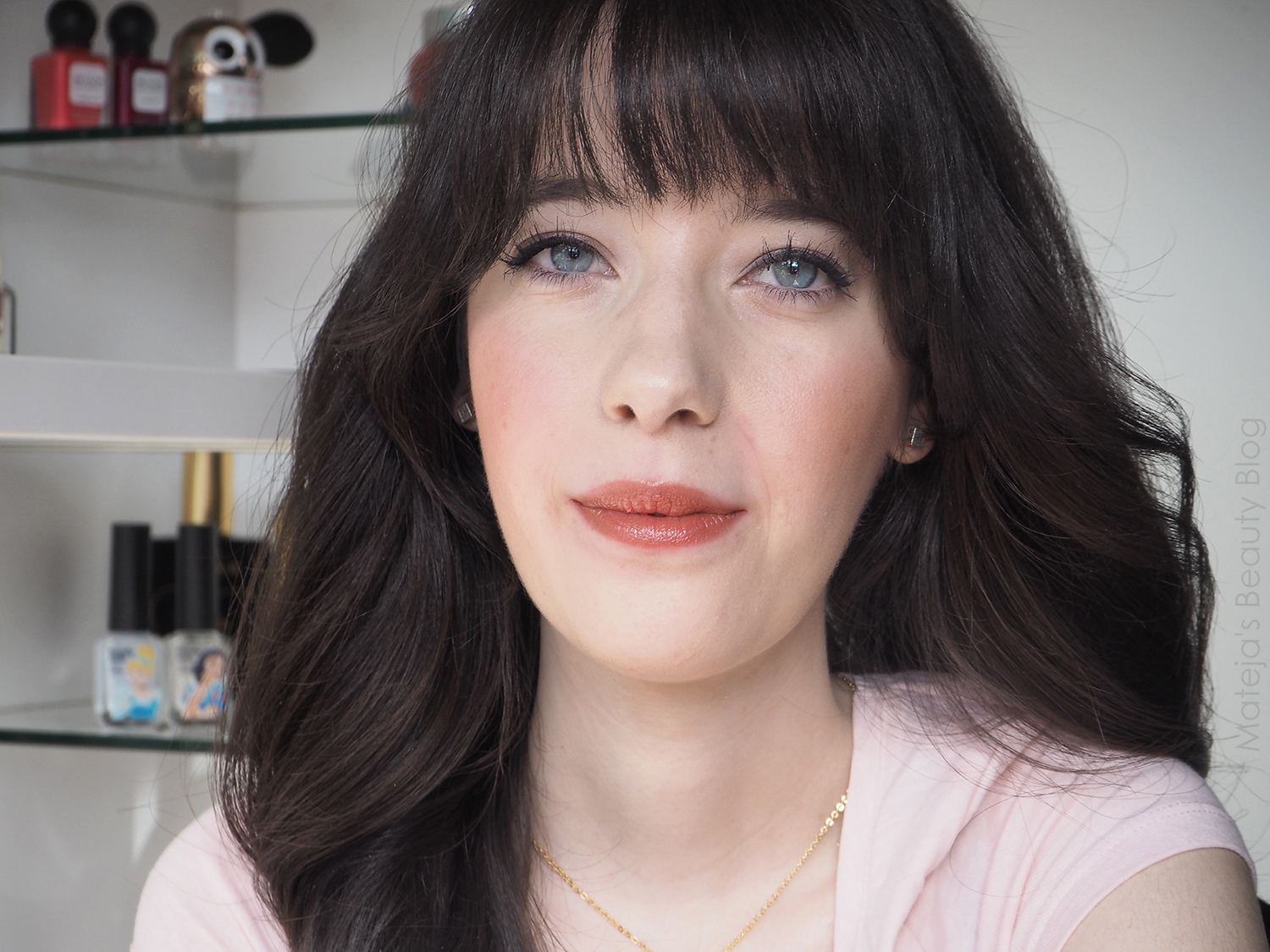 Gone with the nude is a beige brown shade. On darker skin tones it’ll be a nude shade, but I’m not a fan of it on me.
102 Darling pink 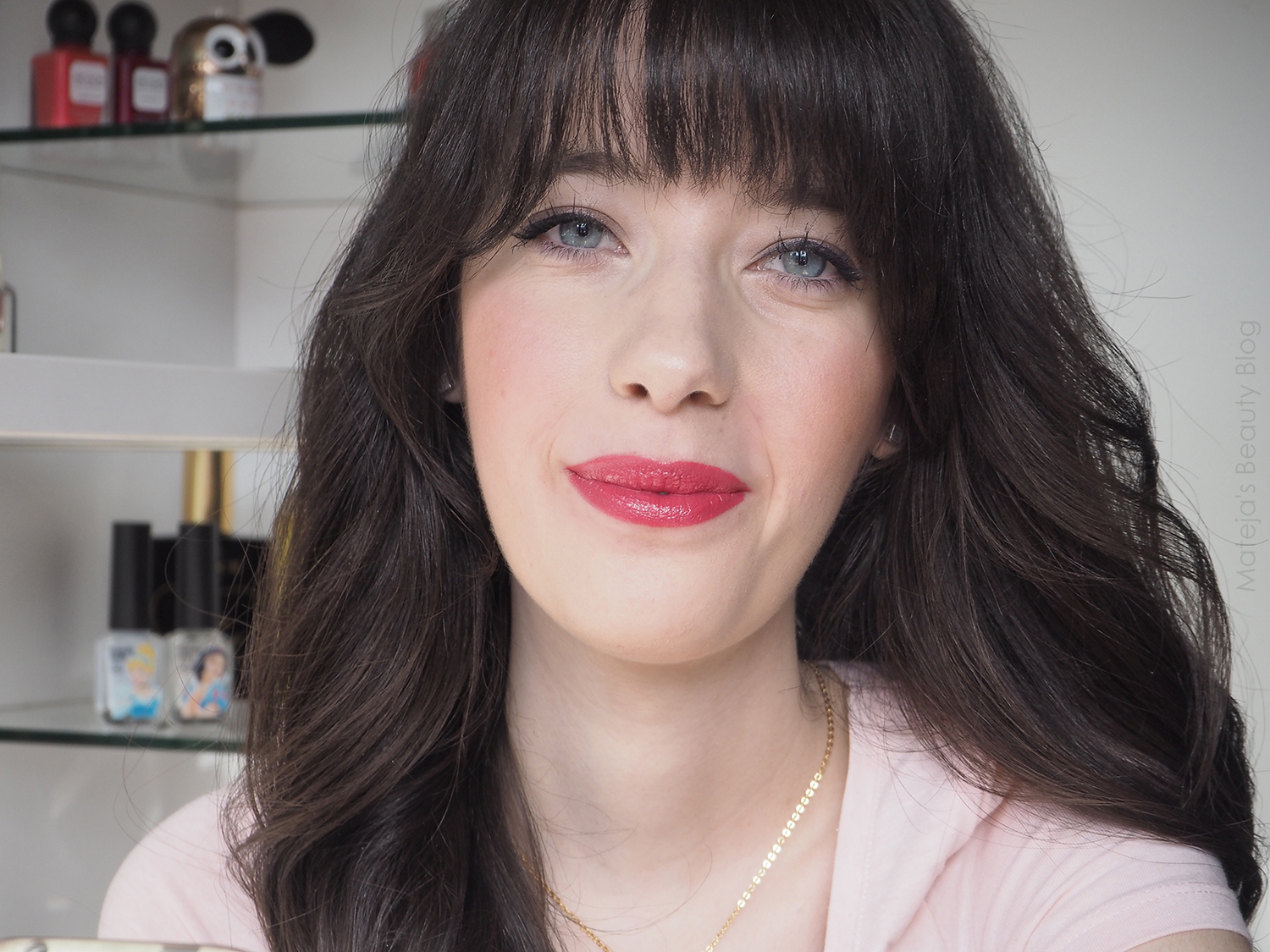 Darling pink is a dirty pink-rose, my favourite and most worn shade. It’s also got the best formula out of all shades, so if you plan to get any, this is the one I’d recommend.
107 Dark river 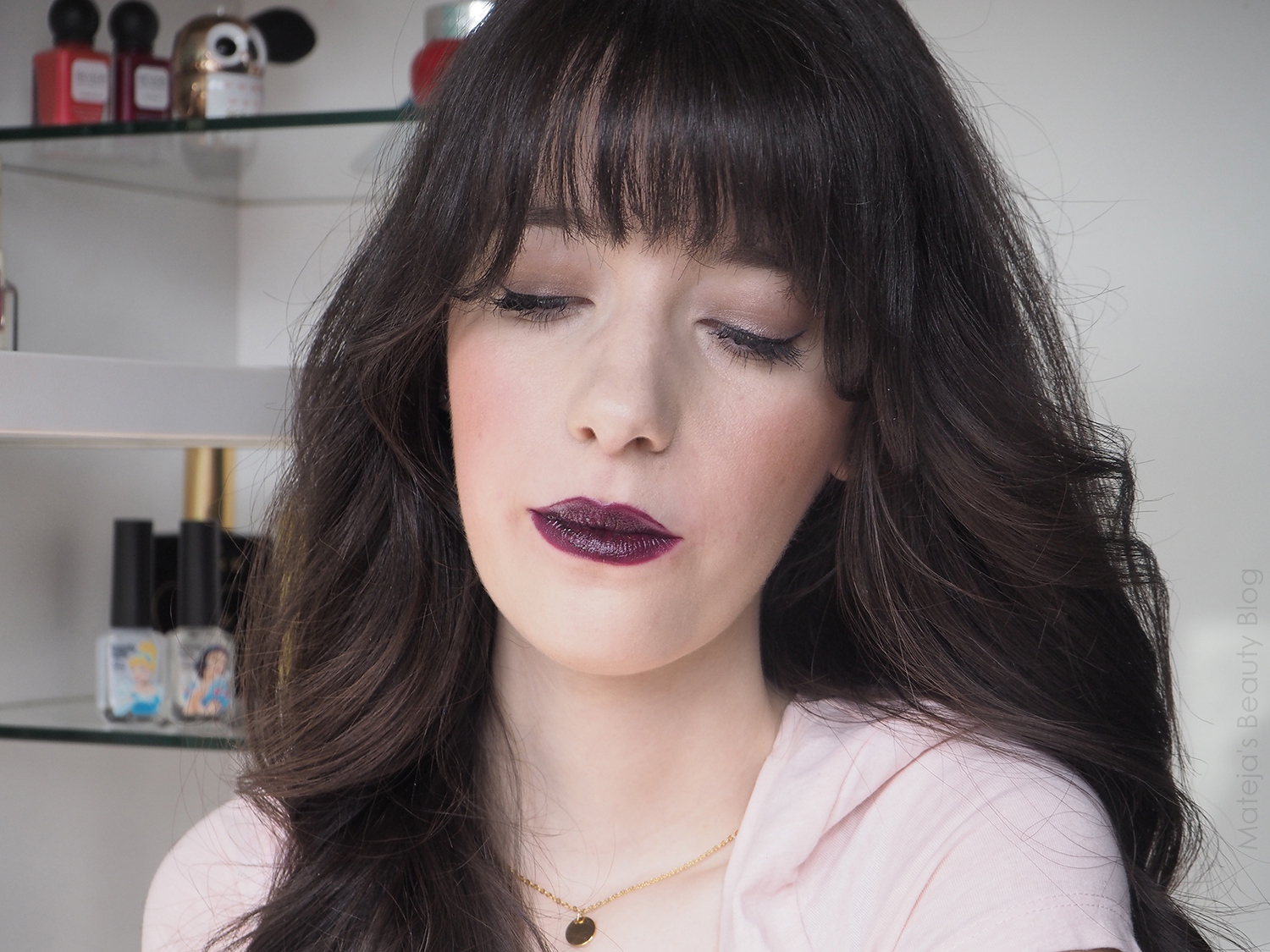 Dark river is a super dark purple that in a thick coat looks black. It’s a mini nightmare to apply, not as much because of the formula, but it’s a shade that forgives nothing and with a glossy formula perfect application just isn’t possible. I really suggest using a lip liner as a base for this, also because it ends up looking uneven with dark and lighter parts, especially on the edges of the lips. I know my application on the close-up swatch looks tragic, but that’s the reality of dark shades. 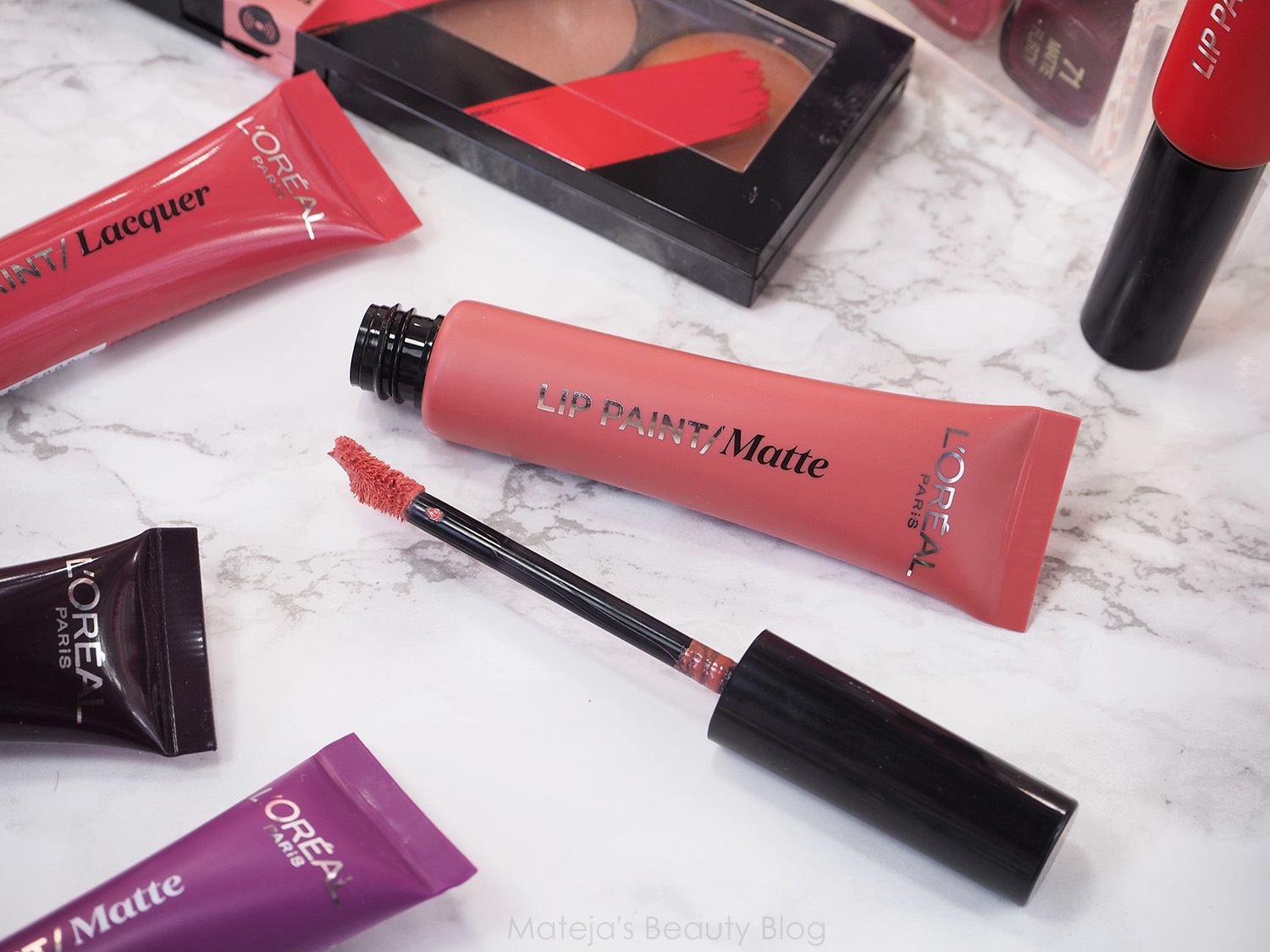 Lip Paint Matte
From a matte liquid lipstick enthusiast perspective, I found these disappointing from the first try because they are not matte. However, I can’t deny these are still good lipsticks nonetheless, just don’t buy them in hopes of a matte finish. These have a mousse type of texture that’s even fluffier than Bourjois’ Velvets, so application is not as even and you need two coats if you want a completely opaque coat of colour, but you need to be careful because you shift the colour a lot due to the fluffy texture. The finishes vary and only the violet shade is somewhat close to a matte finish, while the other two stay kind of a muted creamy finish, or semi-matte that is similar to BeYu Cashmeres. They don’t really ever set, though you get that base stain, but there is none of that traditional tight, matte layer feeling. Since they don’t set, these of course transfer and most of the colour disappears in the first hours, but you are left with a stain, especially at Red actually.
201 Hollywood beige 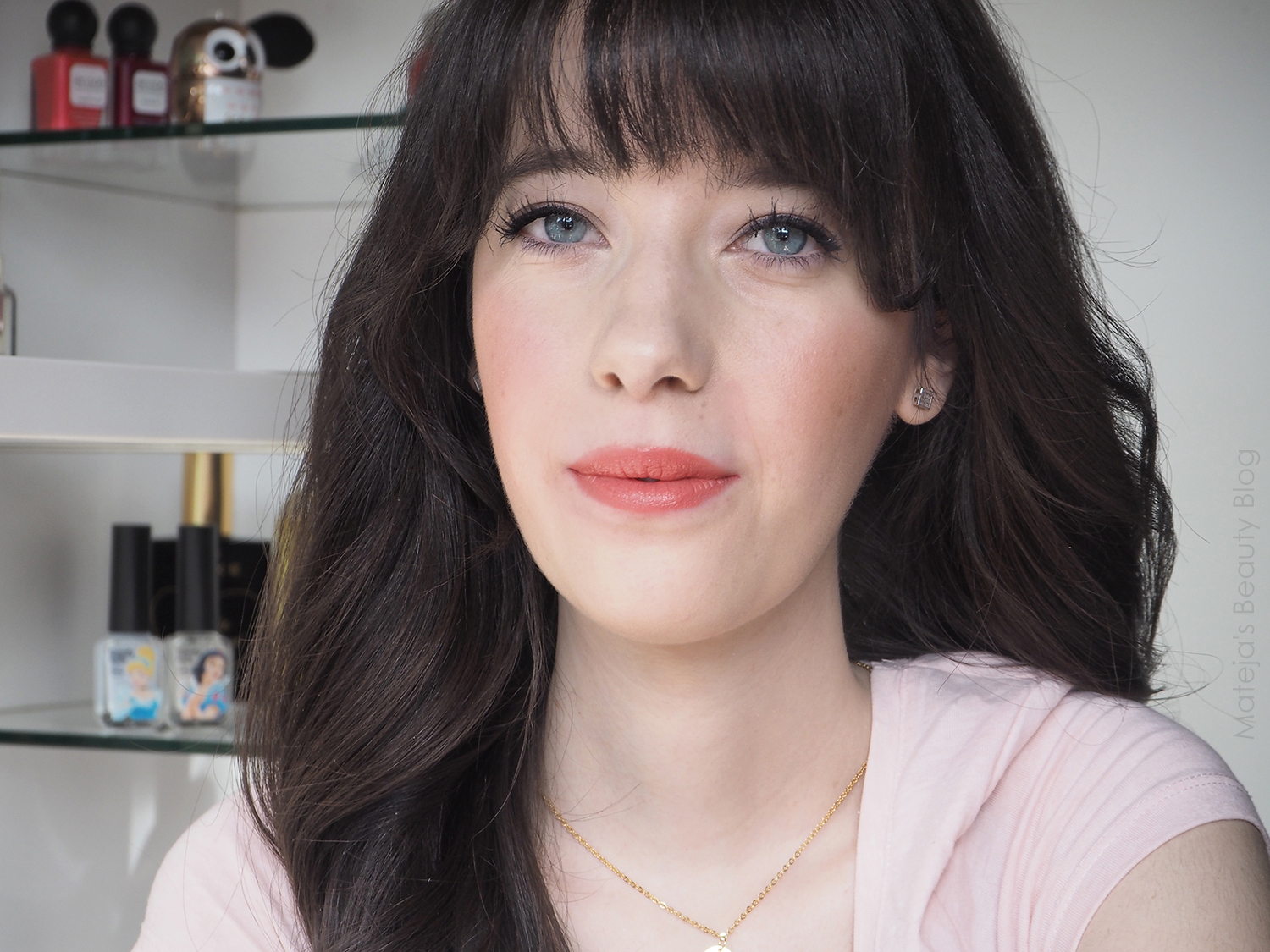 201 Hollywood beige looks pinkish peachy beige once swatched, but on my lips it’s already a brighter, very peachy shade. If you have a darker skin tone, it’s very likely you’ll get a more pinky colour than me. It’s not my favourite, but it’s one of the easiest to wear.
204 Red actually 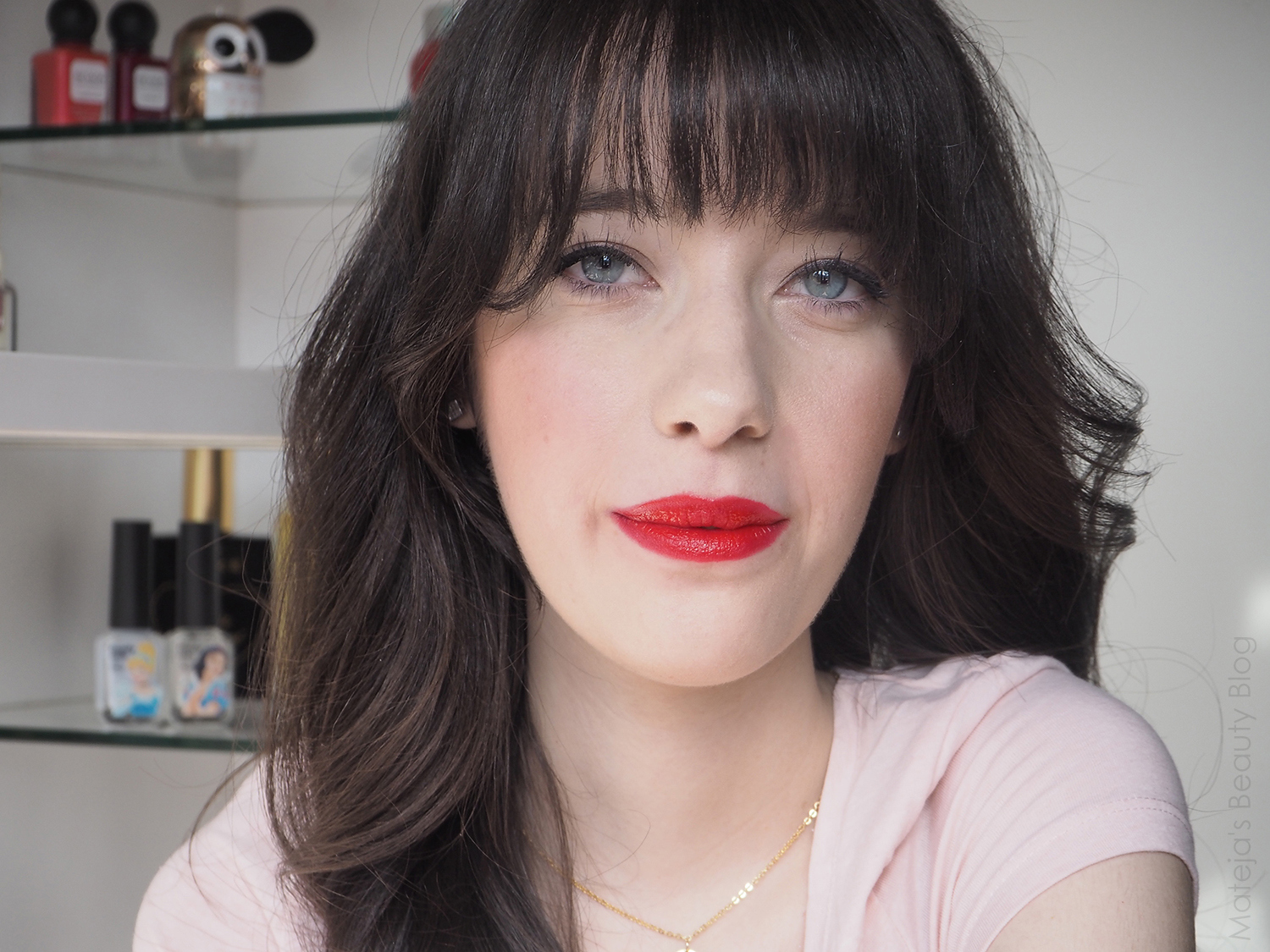 204 Red actually is very complex red. Why complex? Well similarly to Jordana’s Cherry Cobbler, which also fooled me, it’s a pinkish red in a thin coat, but in a thick coat it’s suddenly a warm red. I was so excited when I saw I finally got a red matte liquid lipstick, but it was a let-down, I just expected a stronger pigmentation with one coat. This one stains a lot and the stain is pink.
207 Wuthering Purple 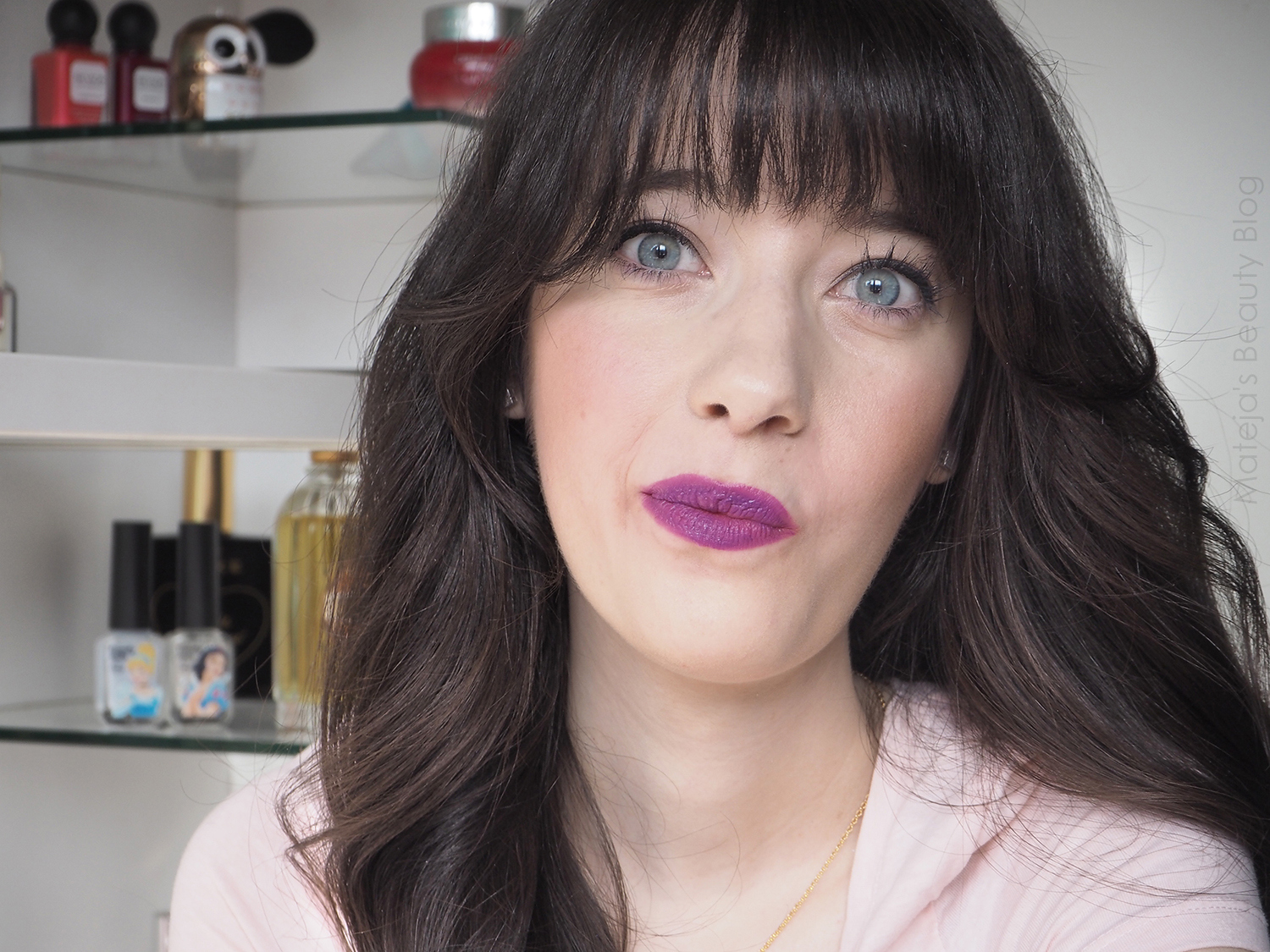 Apologies to all lovers of purple, but 207 Wuthering Purple is a shade that makes me scream”no” aloud. It’s a cool violet shade that I find unwearable for my skin tone in everyday situations. Formula is most like matte, but it’s still not the real deal. 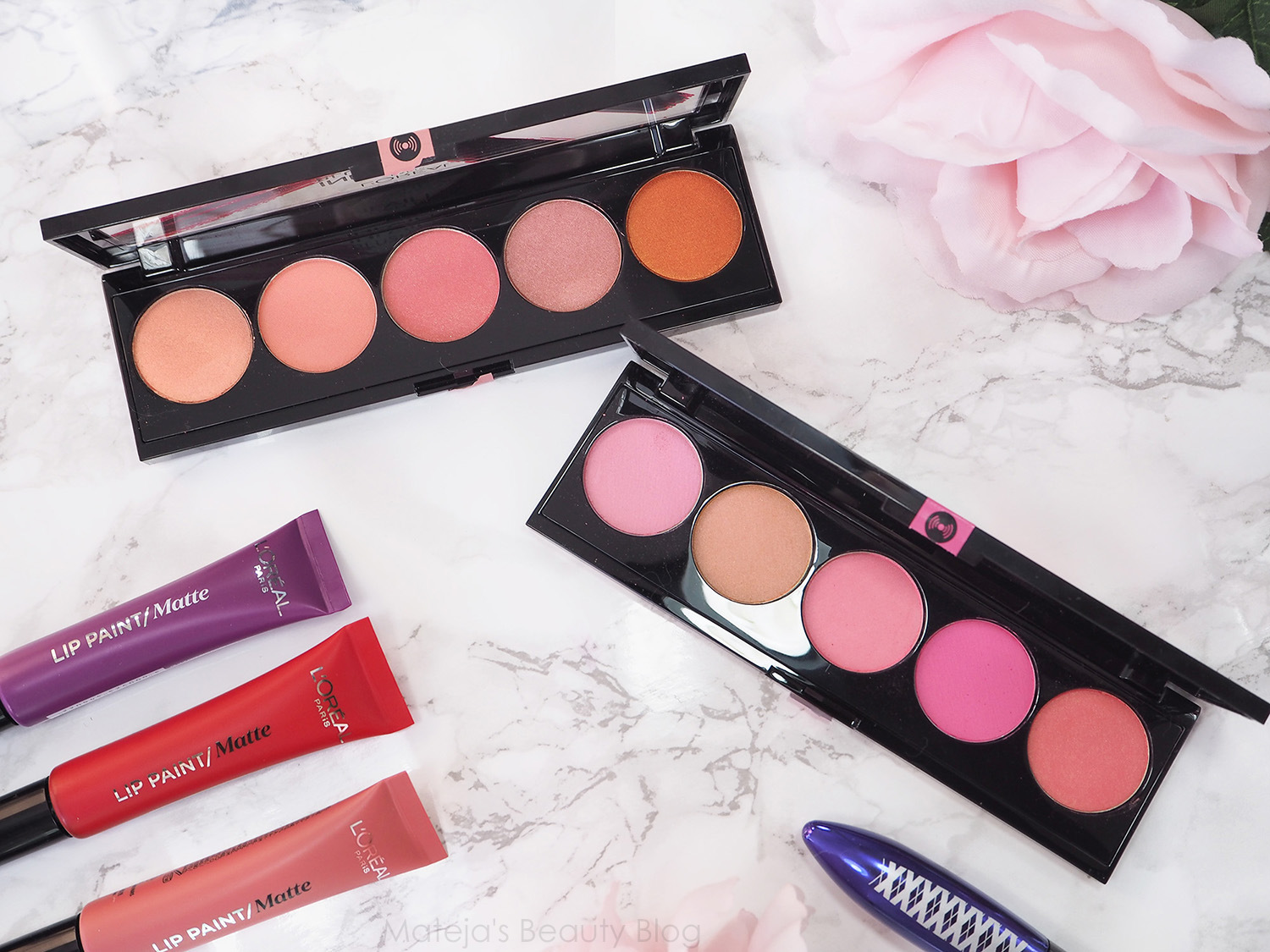 L’OREAL Infallible Blush Paint Palettes
I already included these in my monthly favourites, since they impressed me so much. This is my first time trying L’Oreal blushes, but if all their blushes are like that, they deserve a lot more attention that they are getting on blogs. If my research is correct, than these palettes in this form are sold in Europe, while the States have a similar palette with square pans. All the blushes are powders in various finishes and also vary in quality, but in general the Ambers performs better and it’s the one I really recommend you trying, but both are great drugstore buys. Each pan contains 2g of product and are about 1.5x size of a Mac eyeshadow, so it’s big enough to use pretty much any blush brush, plus they are far apart so you don’t accidentally pick the other shade. Staying power is a big plus at these. On me a majority of blushes don’t last, but at these the first few times I wore them I was so surprised to see blush still clinging on my cheeks at the end of the day. Both palettes have a sweet scent and the packaging is good, I have no complaints. Price is set at 13.49 €, which isn’t too bad for five blushes that actually look different on the cheeks.
PINKS 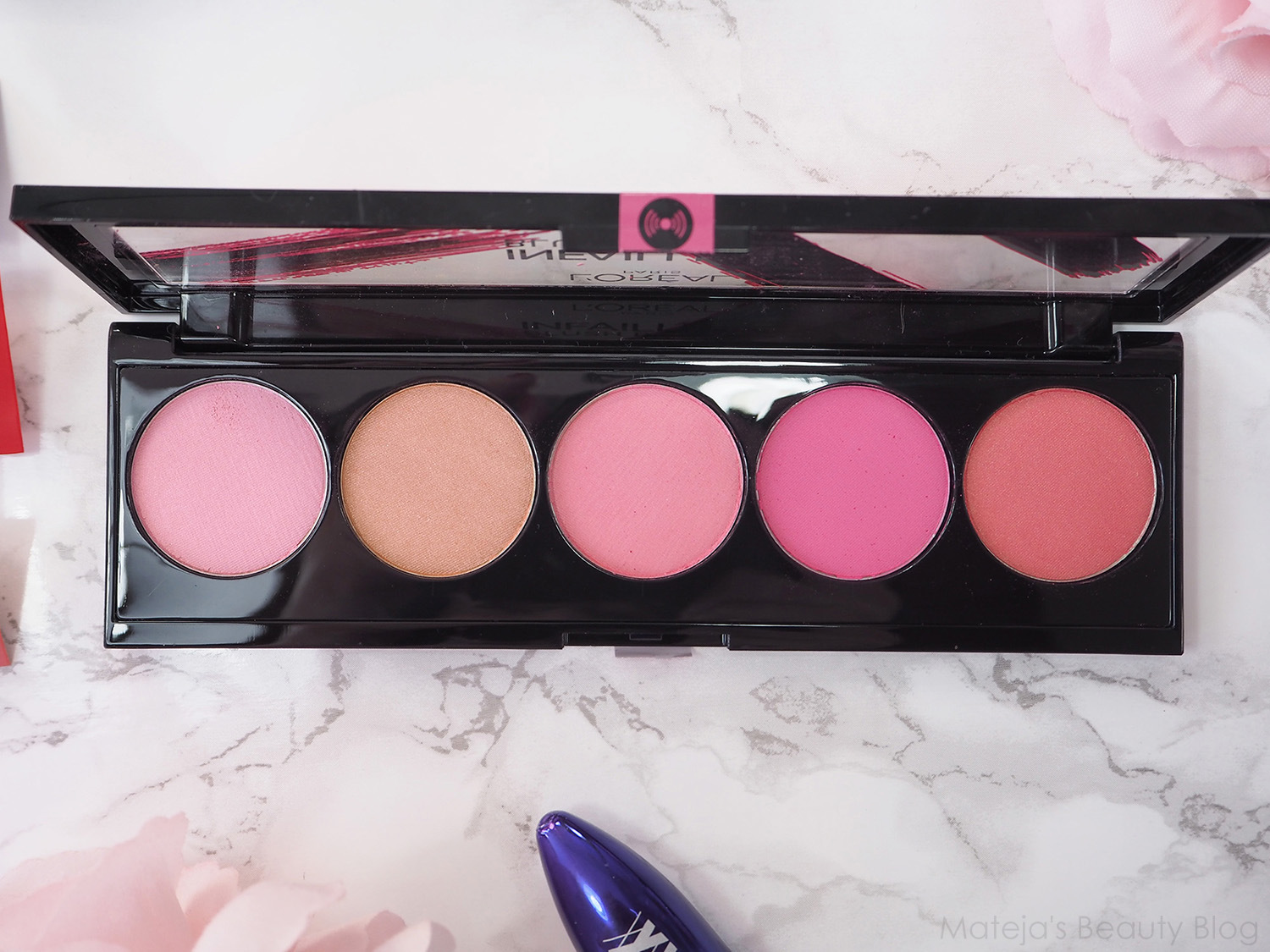 Pinks has a selection of three matte pinks, a light satin peach and a shimmery peach pink. You get a nice variation of both cool toned and warm blushes, and even though it might look like a boring selection of pinks to some, you get two shades that could easily fit into the Ambers palette too. 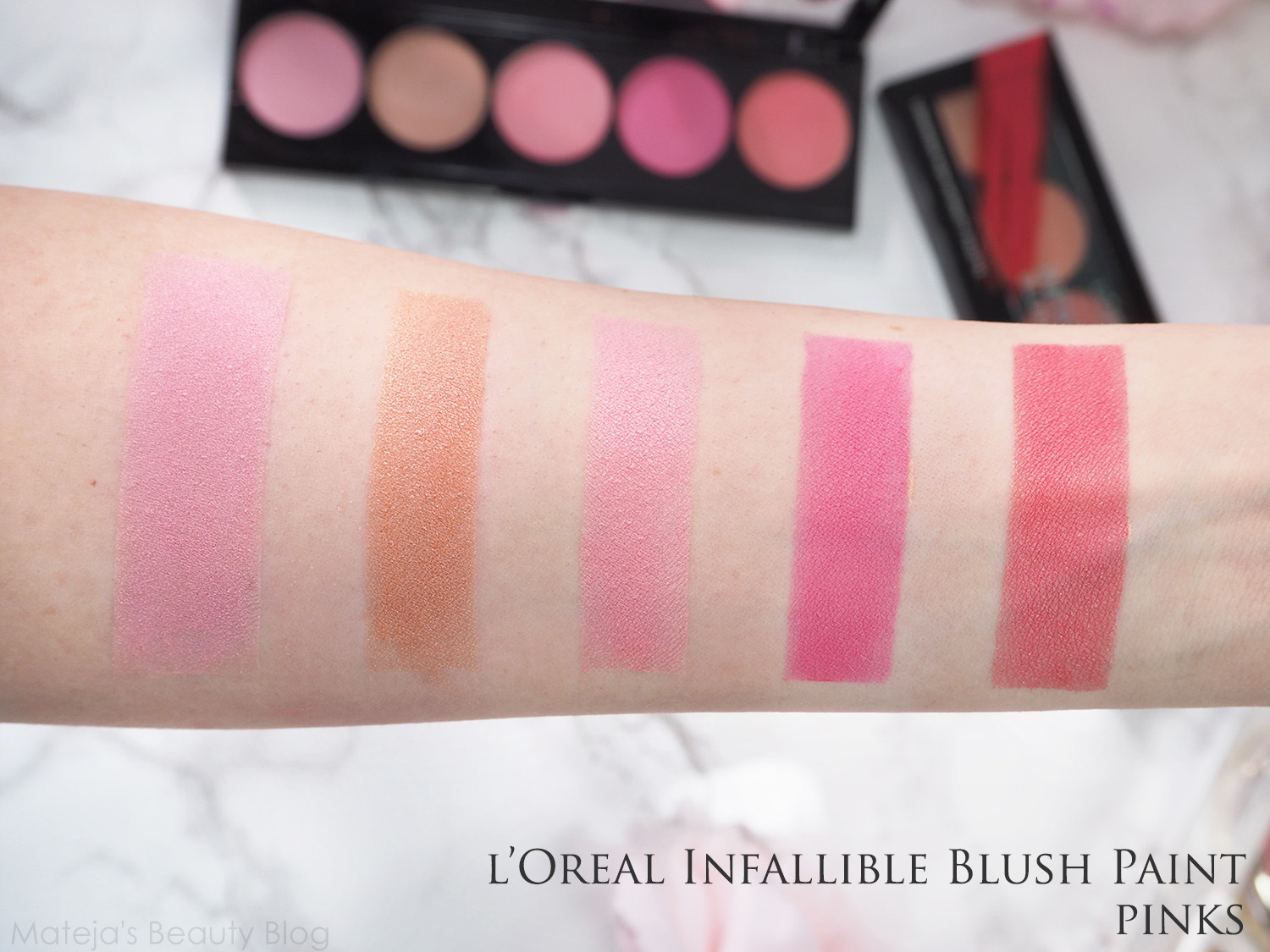 Shade 1 Ballet Dream: a pale, cool toned pink with a matte finish. Like the rest of mattes in this palette the formula is on the dry side, but it swatches and applies well.
Shade 2 Despinkable Me: a muted, natural peach with a light glowy finish. Nicely pigmented for a pale blush and has a great formula.
Shade 3 Peony Rose: a pastel pink with a matte finish that’s a bit darker than Ballet Dream and warmer. The formula is the same as at the first one.
Shade 4 Fuchsia Afterhours: a fuchsia with a matte finish. Again the formula is on the dry side, but it’s the most intense blush in the palette and has the best staying power because of it.
Shade 5 Flamingo Dance: peachy-pinky with a creamy formula and shimmer. It’s somewhat a darker version of Nars Orgasm. 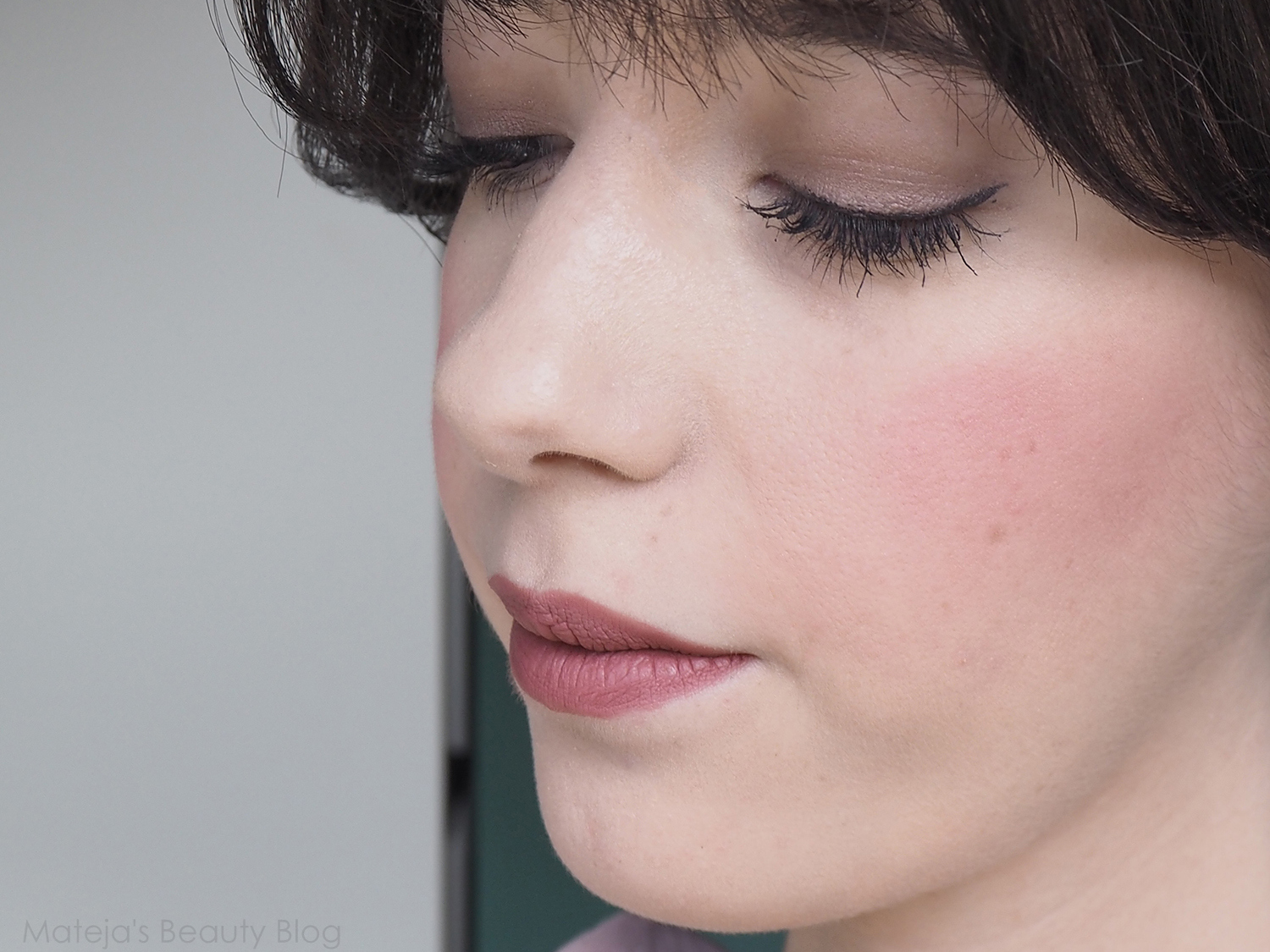 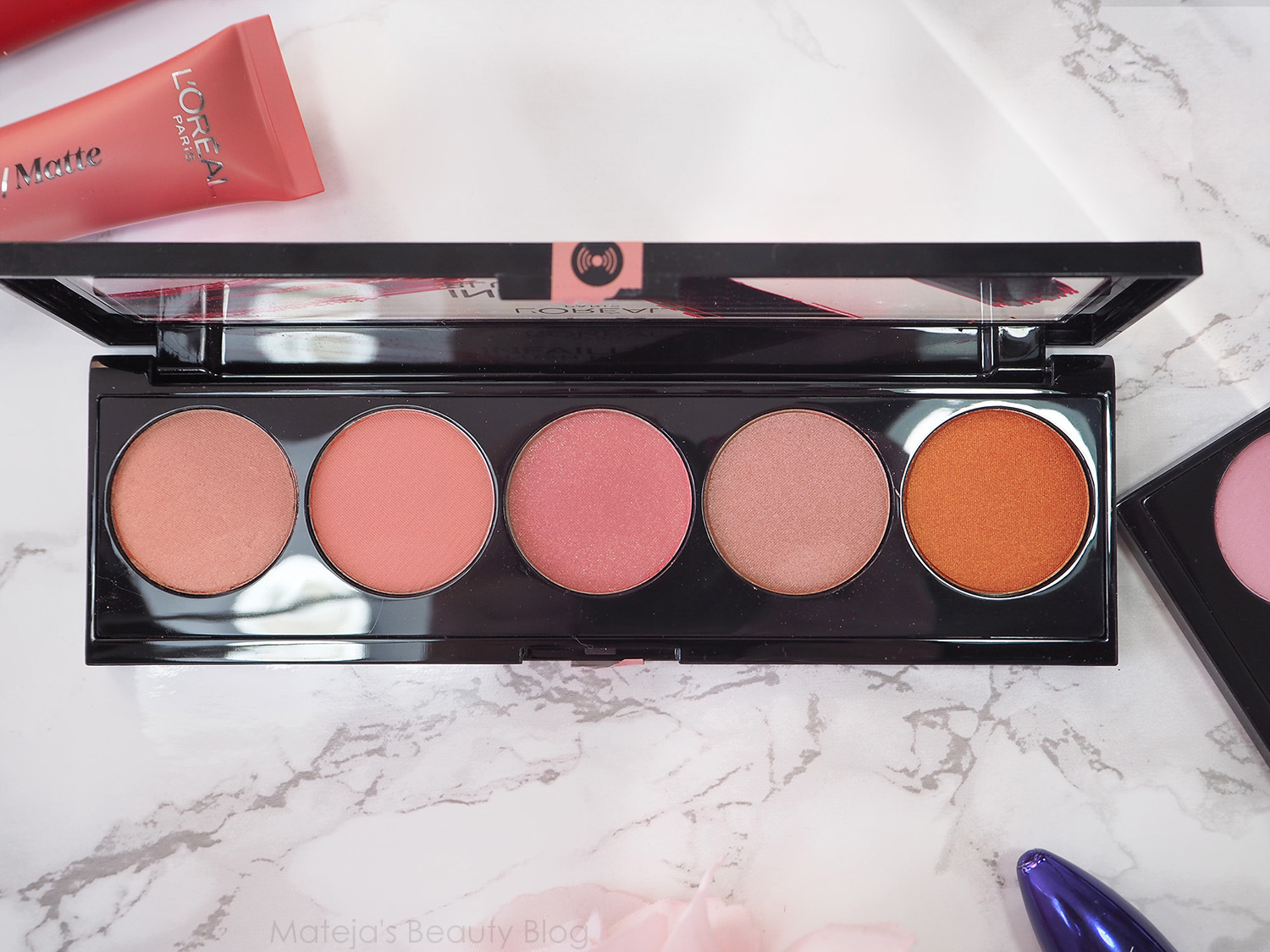 Ambers is a selection of five warm, mostly peachy shades all with some sort of a shimmery/glowy finish. The pigmentation of most shades is excellent, the last two, Amber Love and Indian Cruise, are so incredibly creamy they can easily be used as an fully opaque eyeshadow, the only exception is the middle peachy-pink shade Peach Fling which behaves strangely when swatched, but on the cheeks it’s really good. I wear Amber Love pretty much all the time and Peach fling is my second most worn shade. The last amber shade looks absolutely terrifying in the pan, but applied very lightly, it gives me a wearable peachy flush. 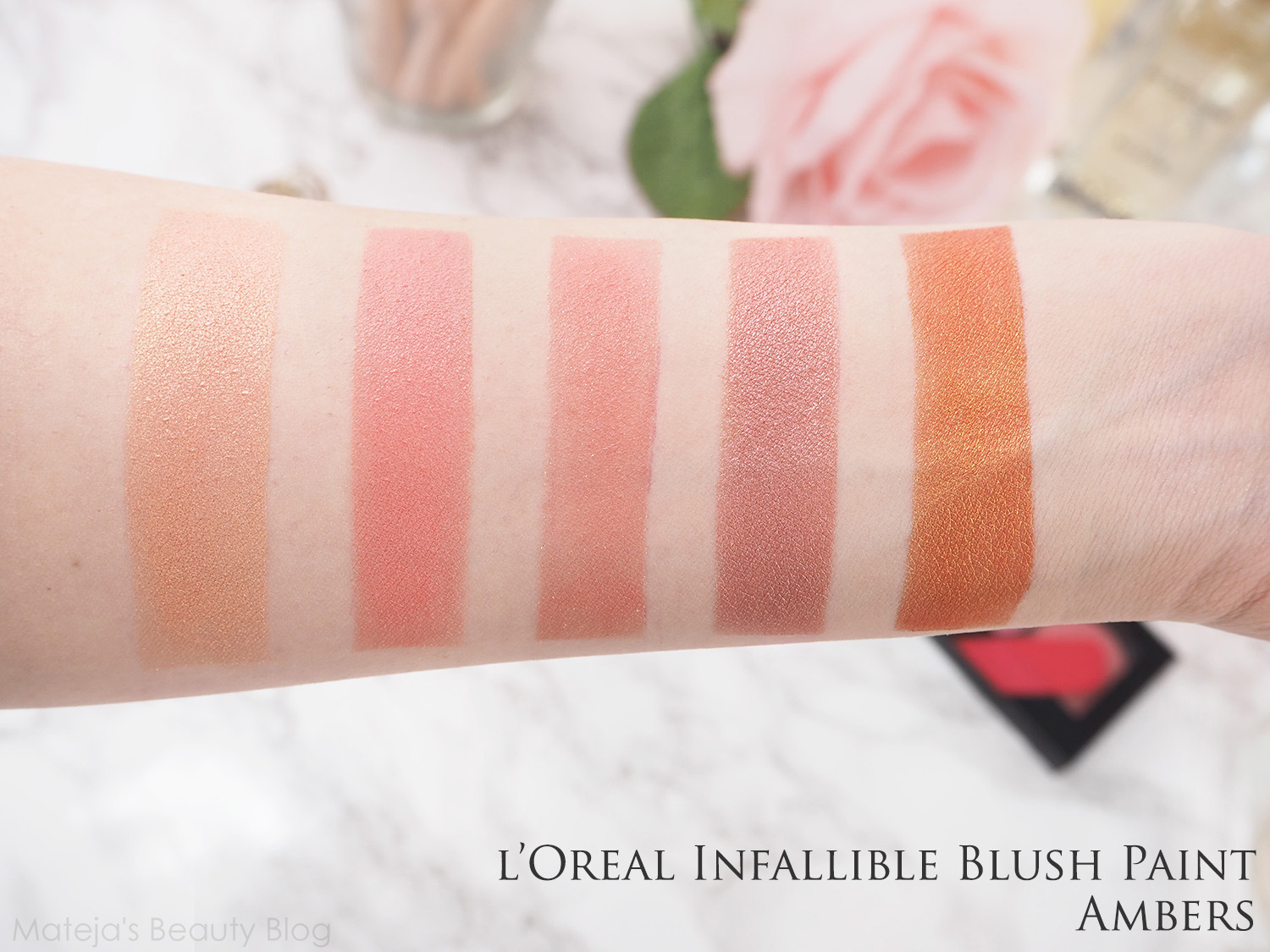 Shade 1 Miami Sunrise: a golden pale peach with a glow, a soft creamy formula and good pigmentation
Shade 2 Coral Bay: a light peachy pink with a soft creamy formula and a glow.
Shade 3 Peach Fling: a muted natural peachy-pink shade, similar to I’m Nuts About You by Catrice, but with gold glitter. It swatches very weak, but looks good on the cheeks
Shade 4 Amber Love: a bronzy pink with a great glow, like a highlighter. It’s super creamy, has an ice gold shine and is very pigmented. It’s on all pictures of the lip swatches.
Shade 5 Indian Cruise: an amber shade with a golden glow. Similar fantastic formula than Amber Love, so very creamy and pigmented. Applied very, very lightly I can make it work on my cheeks. 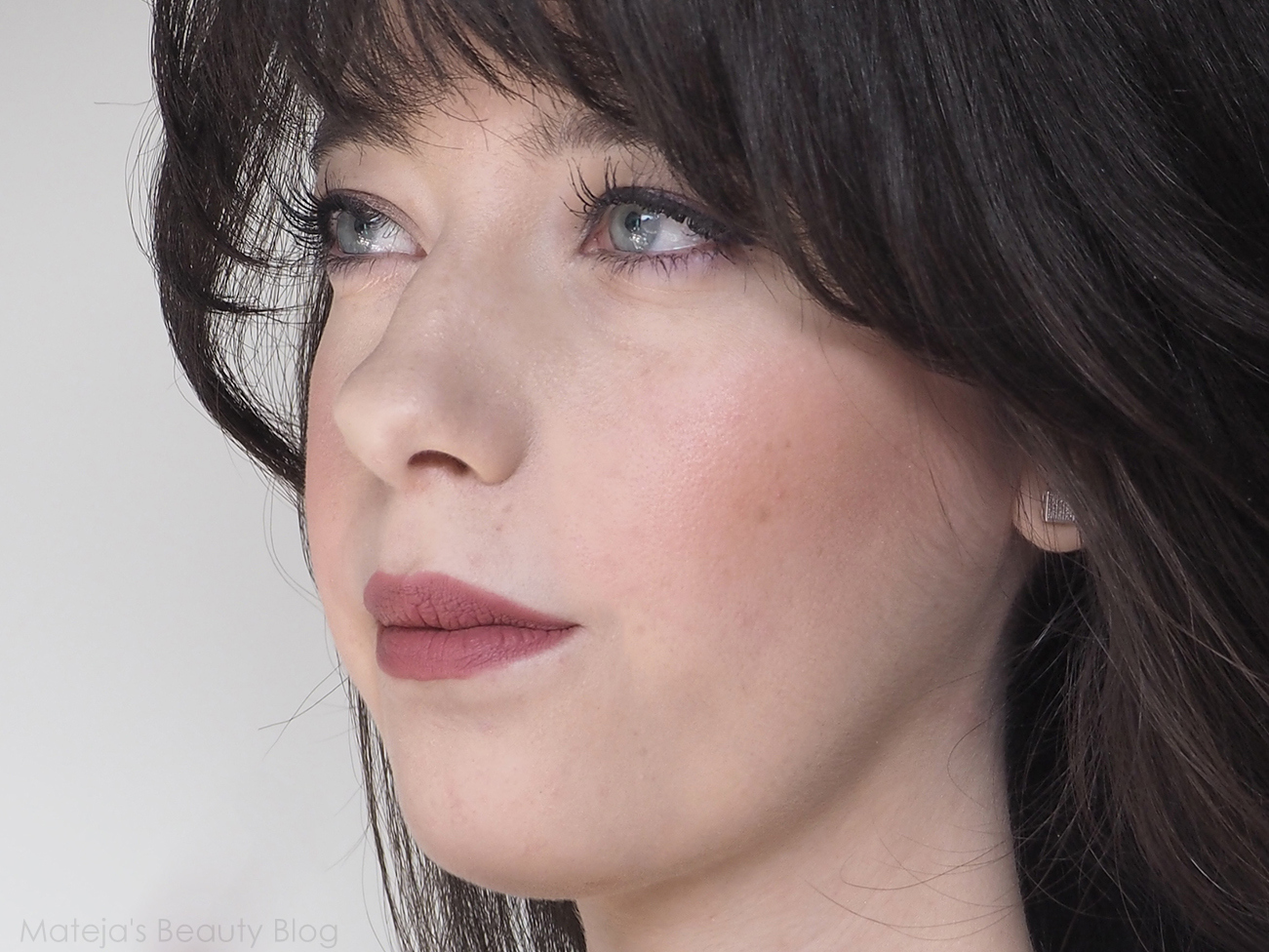 Amber Love. I hope you can see the glow. It’s just the blush with no highlighter. Sephora Marvelous Mauve on the lips.
False Lash Superstar X Fiber Mascara 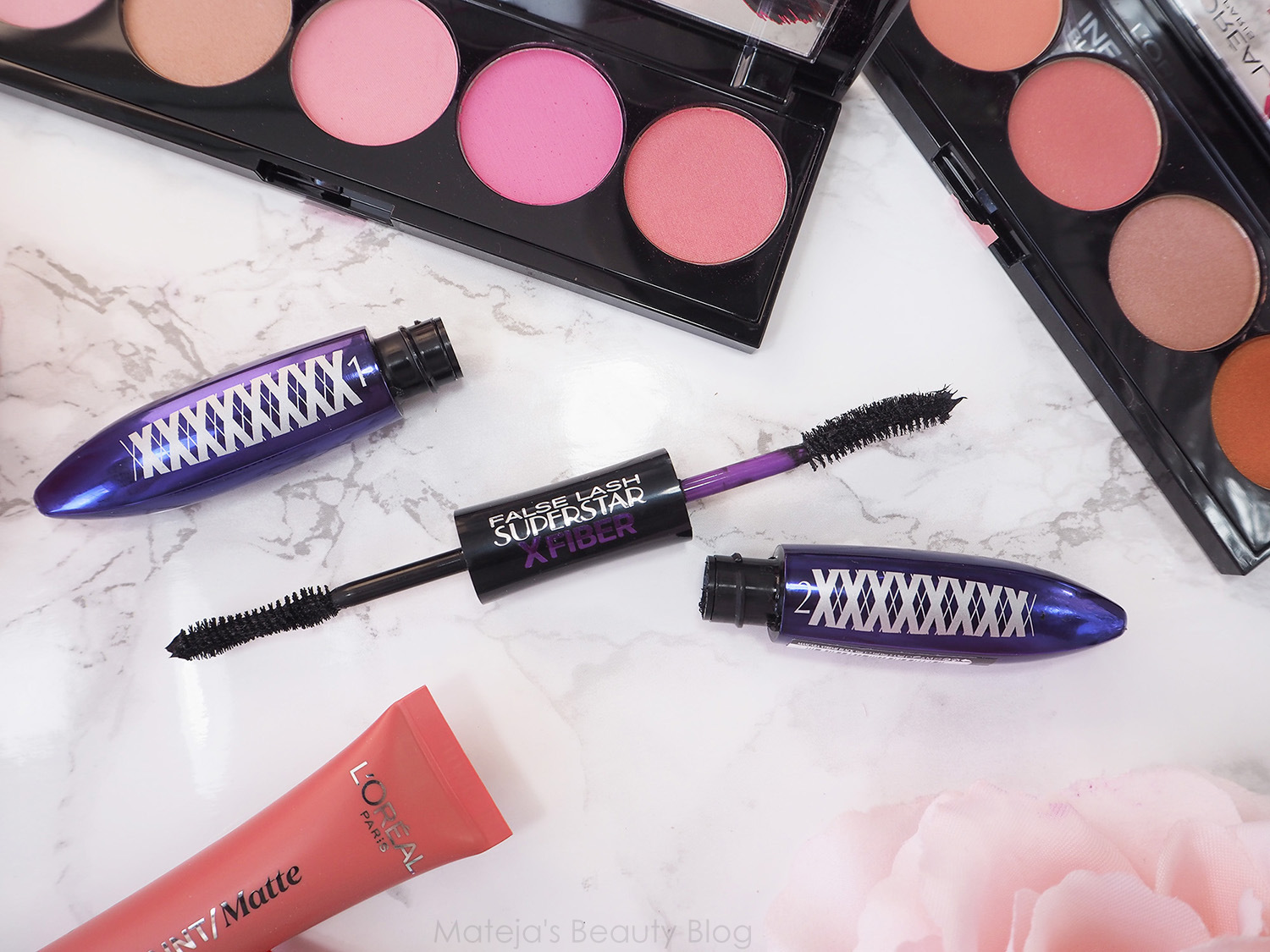 Just like many drugstore companies, L’Oreal enjoys creating spin-off products to ride that wave of popularity a bit longer. I’ve had the original Superstar mascara, which is also a two-step kind and it gives a lot of volume. The new X Fibre extreme contains fibres in the second step, but also it’s improved because the first step isn’t white. 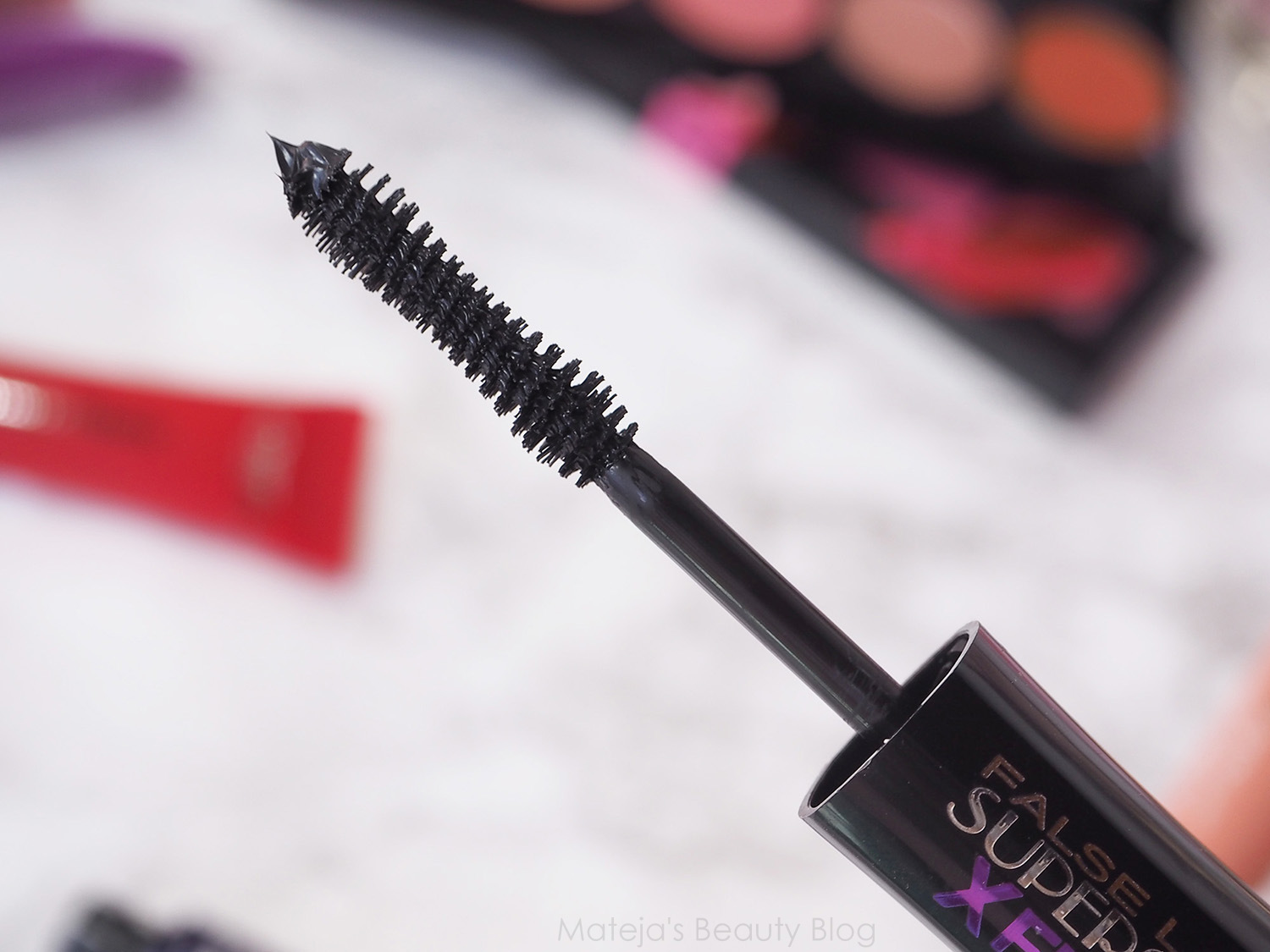 The first step is just a classic mascara. The wand has an hourglass shape and I can get a good effect from just using that side. It gives a nice amount of volume, it doesn’t clump up the lashes and it’s nicely black. The formula of both sides is surprisingly drier than most new regular mascaras I’ve tried, in fact it reminds me a lot more of waterproof mascaras, so it’s not surprisingly it actually holds the curl well enough, of course better than the original Superstar. However, why I find it so strange that it’s not a wet sticky formula, is because the second part has very visible fibres and those need to stick to something. Regardless, they stick to the lashes well, so my fears were unjustified. 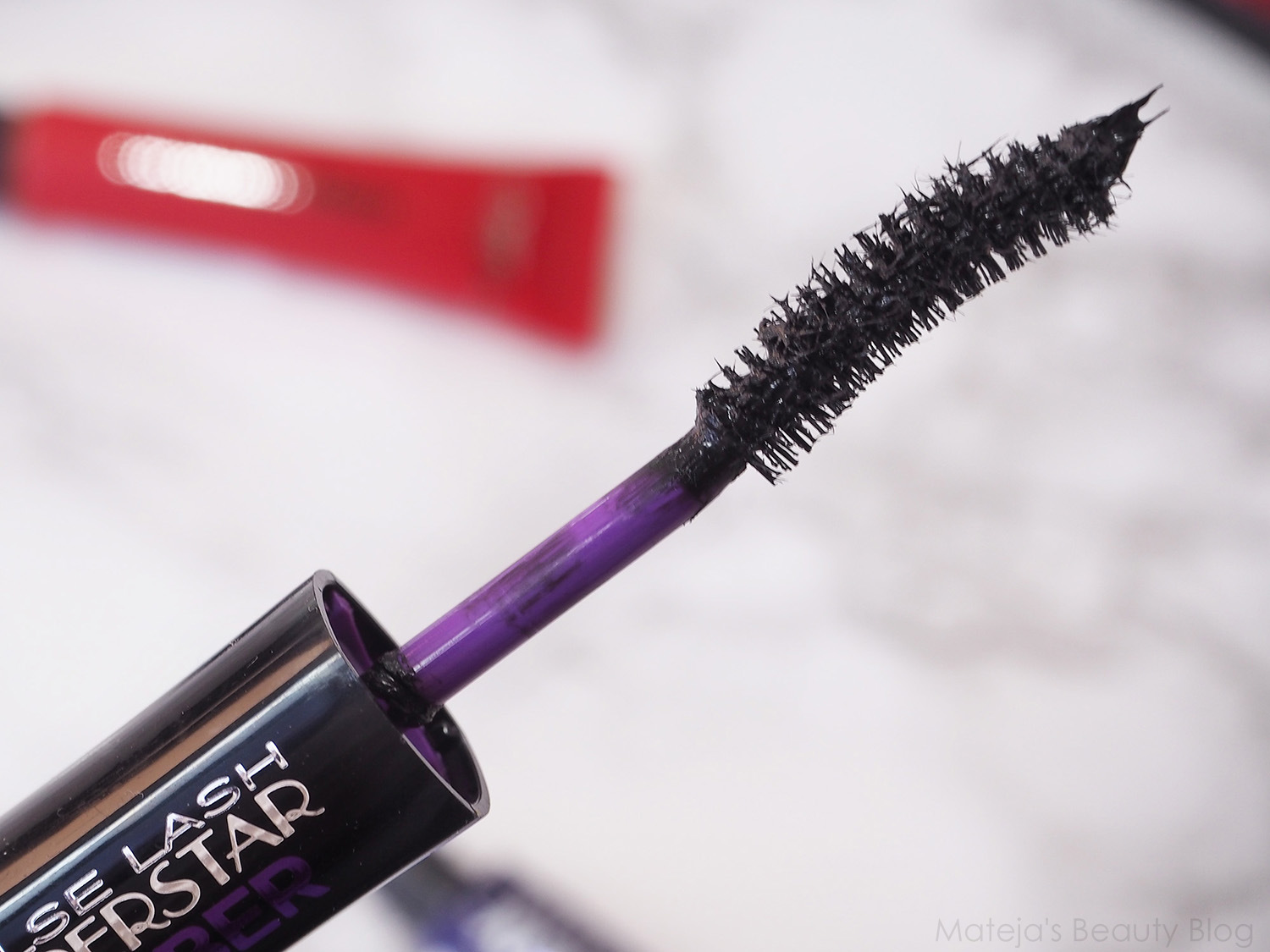 On the other side the wand has a curved design, which I think helps a bit to lift the lashes. The second fibre coat adds more volume, but not so much length despite the promise that the fibres will do that. I’m not a fan of fibres and that is based on my rich experience. So far at every one the fibres started to fall down during the day and when they fall into the eye, it’s painful. 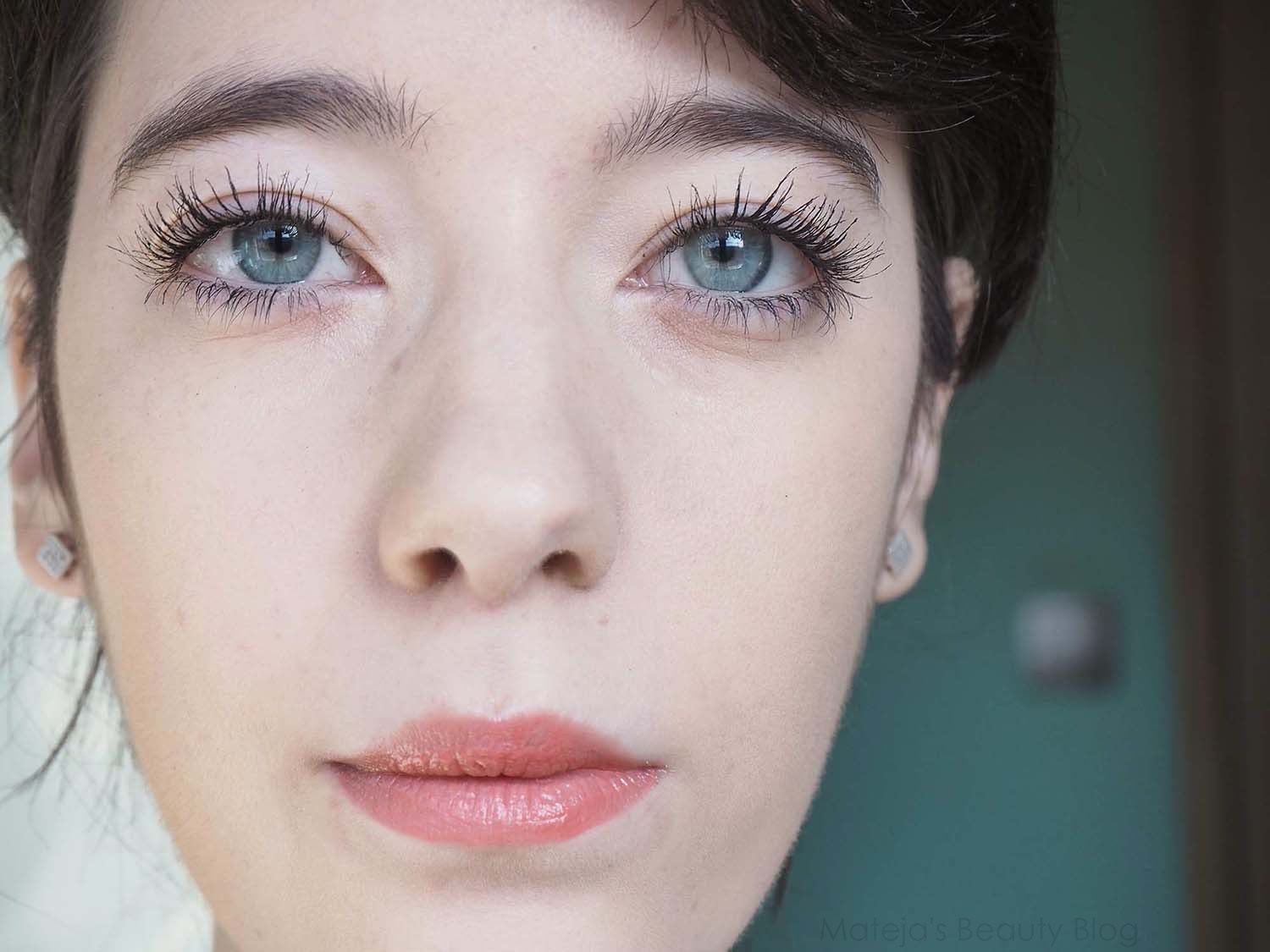 It makes the lashes hard, so as I said, it can hold a curl, but it’s still a regular mascara, so don’t cry with this, especially since it has fibres. It last well on the lashes without smudging or running, but as I said individual fibres collect under the eye during the day.
The packaging is ok and despite being a large mascara, it’s not more difficult to apply. It costs an unreasonable 15.49 €. 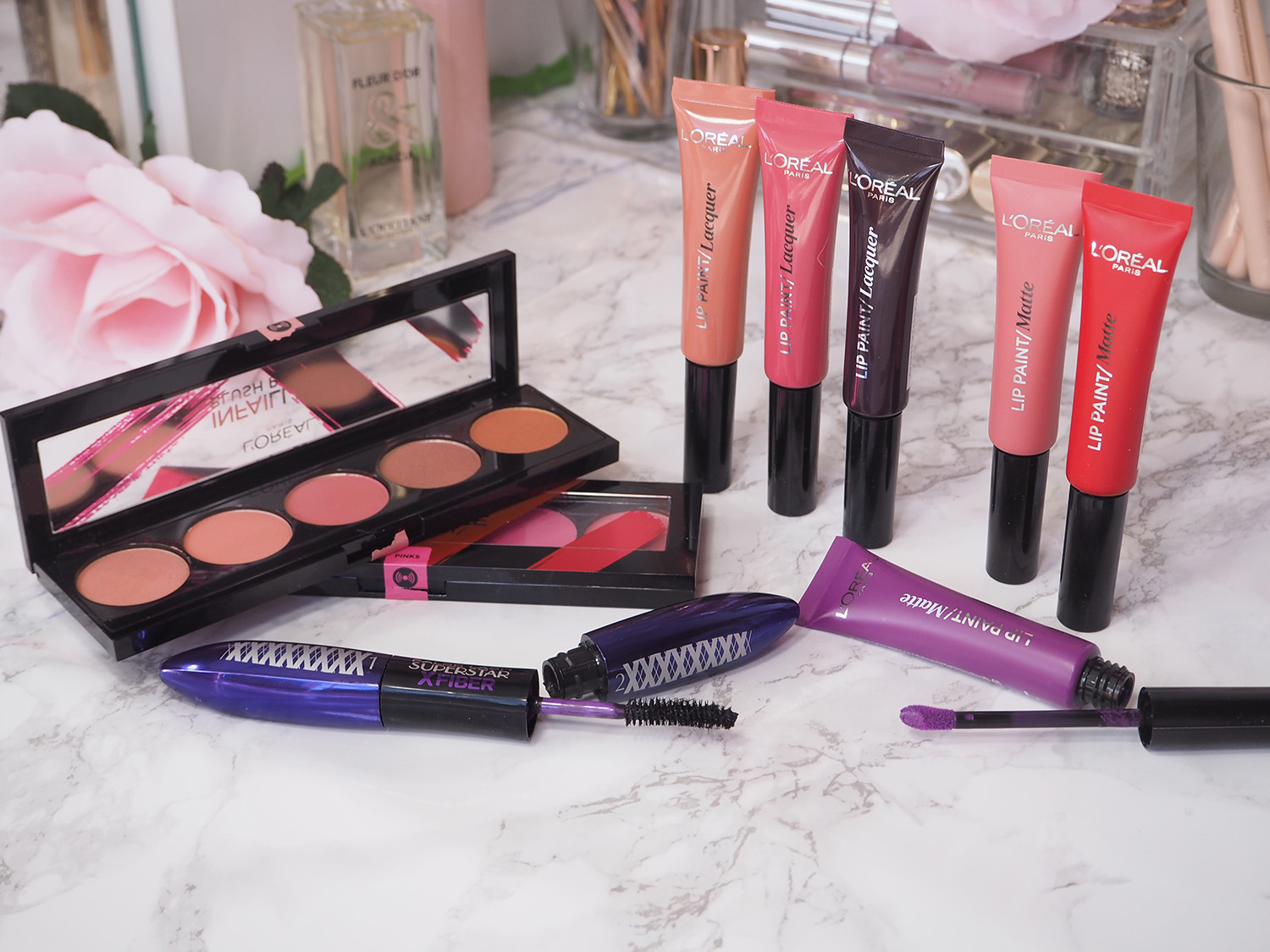